OCEAN CITY — It’s no secret there is a growing homelessness issue in Ocean City, but figuring out how to address it continues to be challenging.

The town’s police commission has discussed the homelessness issue in the downtown area in the past and is scheduled to take it up again in a meeting next week. With increasing frequency, homeless individuals have been taking up residence on the benches, parks and bus stops around the downtown area, and while some attract little notice, others are creating problems and generating complaints from residents and visitors, particularly around the Boardwalk area.

From public drinking and drug use to arrests for fighting and other unsavory behavior, homelessness continues to create challenges for a resort striving to protect its family image. It’s certainly not a problem unique to Ocean City, but it has grown more acute recently.

Heretofore, the town has responded with proactive law enforcement and a holistic approach aimed at getting the homeless individuals the resources they need. However, on the cusp of another summer season, more needs to be done, according to downtown resident Scott Chismar, who broached the topic during Monday’s Mayor and Council meeting.

“We got to do more than we’re doing,” he said. “It’s out of control. Last September, the chief said we have a plan, but whatever that plan is, it’s not working.”

Chismar said before he brought the subject up at Monday’s council meeting, he walked around the Boardwalk and the downtown area to again see for himself some of the problems.

“It’s a mess and the season hasn’t even started,” he said. “I walked around up there tonight before the meeting so I was sure about what I was talking about and there was open-air drinking. Now, some of them have animals tied up.”

Chismar pointed to the recent successes of task forces appointed to address certain issues affecting the resort, such as the task force aimed at exploring how to lessen the impact of the motorized special events, and questioned if the same approach could not be used to address the growing homeless issue.

“The council saw a problem and took steps to fix it,” he said. “Maybe we can form a task force to begin making this better because it’s only getting worse. I know that I wouldn’t have any problem getting volunteers from the downtown community to serve on that.”

Councilman Wayne Hartman said he witnessed some of the issues related to the growing homelessness issue as recently as last weekend.

“During Springfest, I walked down the Boardwalk and there was a situation where there were multiple benches being utilized by one person with their belongings spread out,” he said. “I even took a photo. I know the problem is still there and maybe even growing.”

Councilman Matt James said he knew the Ocean City Police Department (OCPD) and the police commission had been discussing the issue and formulating plans on how to address it, but wondered if there was any benefit to having OCPD Chief Ross Buzzuro brief the elected officials at a future meeting.

“Would there be an opposition to having the chief meet with us, maybe in a closed session, so we can discuss it as a group?” he said. “Maybe what was implemented before hasn’t worked. I don’t know if we need new ordinances, or if we need legal advice, but wherever that needs to go, I think we need to have that conversation.”

Councilman Dennis Dare, who serves as chair of the police commission, said the town was working with various agencies in the community to address the issue. He also reminded his colleagues there might not be any easy solutions.

“We’ve had representatives from Worcester County Health and Diakonia come and they were very informative,” he said. “While these individuals may be without a roof over their heads, they are not without their rights. That’s a fine line that we have to be able to draw. They still have rights and it’s just a difficult situation.” 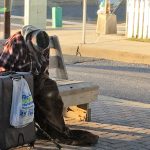 A homeless man is pictured at the downtown transit center last month.

Dare said City Engineer Terry McGean is expected to brief the police commission next week on some physical changes to the area prone to the homelessness issue including the Caroline Street comfort station.

“We’re going to be looking at that more with the Caroline Street area from a physical standpoint,” he said. “The city engineer is looking at taking the tram lane around the ocean side of that stage to get rid of that conflict there and maybe opening up that area more with better lighting. We’re looking forward to that discussion.”

Hartman said he understood it was a complicated issue and suggested there could be physical changes to the Boardwalk benches, for example, that could alleviate some of the problems.

“I understand the homeless have their rights, but when we have a $1,700 bench there and just one person utilizing it, I think that takes away other people’s rights to use the bench,” he said. “With the benches that we have, can we find out if there is an arm rest available that can be put in the middle of it? When one person is laying across the bench and we have three or four of them in the same area, I think it’s problematic.”

City Manager Doug Miller said there were arm rests that could be added to the benches and  said he would explore the costs of purchasing and implementing them.