In what was Judge Peggy Kent’s first adoption since being sworn in as a Worcester County Circuit Court judge, Mardela Springs residents Steve and Tina Collins officially welcomed the five children they’ve fostered for the past year into their already large family. When they initially found out that the three brothers of the two little girls they were fostering needed a place to go, they wasted no time in offering up their home.

“How do you choose?” Tina Collins said. “We fell in love with the girls. We felt it was important to keep them all together.”

“Mainly just because of the stories you hear,” Tina Collins said. “There are so many children in need.”

And so when their youngest child was 18, they went through Worcester County’s certification program to become foster parents. They went on to adopt the first two children they fostered, a brother and sister, before agreeing to foster two more girls early last year. It wasn’t long before the Collins were advised that the girls were part of a group of five siblings. In June of last year, the boys rejoined their sisters in the Collins home.

“That’s the amazing part of this story,” said Roberta Baldwin, director of the Worcester County Department of Social Services. “There was a family willing to open their home to all five. There aren’t many families with the ability to do that. It just shows they put the needs of the children first.” 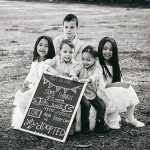 After being fostered for the last year, these five siblings, ranging from 2 to 8 years old, were adopted officially Thursday.

On Thursday morning, Steve and Tina Collins officially adopted Kayden, 2, Karter, 3, Kennedy, 5, Kelsie, 7, and Konner, 8. They now have a total of 10 children. Tina Collins said she was surprised by how quickly the children blended together.

“They all became a family immediately,” she said.

She and her husband are still adjusting to the increased size of the family.

Baldwin said Worcester County needed more families willing to open their homes to children in need. She said it was particularly difficult to find homes for sibling groups, adolescents and children with special needs. In Worcester County, while officials work to reunite kids in foster care with their biological parents, that is not always possible. Substance abuse and mental health issues often prevent that from happening.

“Parents find themselves in the position they can’t provide appropriate care,” she said.

That’s when families like the Collins, who are willing to welcome kids in need into their home, prove so vital.

“Sometimes love is all a child needs,” Baldwin said.

Kent said she was thrilled to preside over such a significant adoption.

“It is a happy day,” she said. “I love seeing the kids so beautiful and so healthy.”