On March 30, the date that marks “Welcome Home Vietnam Veterans Day” each year, members of Vietnam Veterans Chapter 1091 of Ocean City dedicated a bench at the Worcester County Veterans Memorial. The bench features the names of the eight local men killed during the Vietnam War.

“Their names will be a permanent reminder to all who come here to our memorial to learn and appreciate the sacrifices that members of our armed forces provide to guarantee that we remain free,” said Mary Adair, a member of the board of directors for the memorial.

Nelson Kelly of Ocean City’s Vietnam Veterans Chapter 1091 said the idea of honoring the men killed in action with a bench came up after the organization recognized Berger in Ocean City last year.

“March 30 is Welcome Home Vietnam Veterans Day,” Kelly said. “Last year on this same day we dedicated a bronze plaque and a bench in front of Ocean City City Hall dedicated to Barry Howard Berger, the only Ocean City native to be killed in action at Vietnam. It was brought up at our next meeting about how we should do something for the eight Worcester County men that died in Vietnam.”

They decided the addition of a bench to the Worcester County Veterans Memorial would be an appropriate way to recognize the men. That bench was unveiled Friday in front of a crowd of local citizens and family members of the veterans being honored. 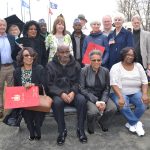 Family members of those honored are pictured last Friday at a remembrance ceremony.

“I welcome all of you who have come  to dedicate this bench in memory of the eight brave men who paid the ultimate price in defense of freedom during the Vietnam conflict,” Adair said. “After many years it is fitting that we honor these men who answered the call to serve.”

Ocean City resident June Kelly said she was pleased to see something done to remember those who died in the Vietnam War.

“It truly is about time,” she said. “We all still do remember.”

Mitchell Briddle, whose brother Charles died during the war, said he also appreciated the effort to recognize the veterans.

“I really miss my brother a lot,” Briddle said. “He taught me to be a better man. He taught me a lot of things, positive things, and to this day I always represent his life and everything he taught me. I just like that we are doing this for our veterans. Hopefully we’ll continue to do more for our veterans and let the world know that we still care.”

Friday’s ceremony also included the presentation of citations honoring each of the eight veterans to their families by a representative from Sen. Jim Mathias’ office.