BERLIN — Local home prices are down, according to the latest numbers from the Coastal Association of REALTORS® (CAR). 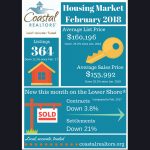 The graphic recaps the key statistics for the shore housing marketing. Image courtesy of CAR

Days on market was down overall by 6.2 percent compared to January 2018.

“The local market slowed down a bit in February, which is relatively normal for this time of year,” said CAR President Joel Maher. “The decrease in prices definitely opens a good window for anyone who is considering buying anytime soon. This is also a good time to catch lower mortgage interest rates, which are increasing and are expected to surpass five percent by the end of the year.”

“As the owner and operator of four of Ocean City’s top-rated golf facilities, Ruark Golf has an intimate connection to the local golf scene and all it has to offer,” said Chris Harrison, general manager of Ruark Golf Packages. “Ruark Golf Packages was created as a resource for golf travelers to help them determine the best fit for their group to dine, stay and play, whether it’s at one of our clubs or any of the other exceptional golf options in the area.”

“Golf vacations mean different things to different people,” said Harrison. “Some like to cram in as many holes as possible, others prefer to carve out time to enjoy the beach with family and friends. Ruark Golf Packages specializes in finding the best lodging option for each group.”