OCEAN CITY – A local organization is asking businesses, residents and visitors to go “strawless” this summer.

From May through August, the Ocean City chapter of the Surfrider Foundation – a national nonprofit whose mission is to protect the beaches and ocean – is raising awareness of plastic pollution by launching a campaign that encourages restaurants, locals and visitors to stop using plastic straws.

Last week, the local chapter released an online pledge as part of its “Strawless Summer” campaign.

Jane Robinson, chair of the Ocean City chapter of the Surfrider Foundation, said the pledge is a call to action for individuals and restaurants who will commit to not using plastic straws this summer. As of Tuesday, the group has collected more than 115 online signatures.

“It has surprised us how many people have signed the pledge,” she said. “It’s not even spring yet.”

The local organization said individuals can do their part to make the ocean and beaches cleaner by using environmentally-friendly straws or by letting restaurant waitstaff know ahead of time that they would not like a straw in their drink.

“We are directing this campaign at both restaurants and individuals,” she said. “It’s a great way to raise awareness without spending money.” 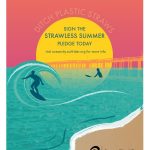 Robinson said 500 million plastic straws are used in the U.S. each day and often pollute the ocean, bays and tributaries.

“That is mostly what you will find during beach cleanups,” she said.

In addition to the online pledge, Robinson said the group will also work with local restaurants to promote the “Strawless Summer” initiative and register restaurants as an Ocean Friendly Restaurant, a Surfrider Foundation program for restaurants committed to making sustainable choices.

“We plan on visiting as many restaurants as we can in the next month,” she said.

While the Surfrider Foundation is doing its part to promote its campaign, restaurants like the Blacksmith in Berlin are furthering their sustainability efforts.

“We want to get away from plastic,” she said. “That’s been one of our commitments from the very beginning.”

Zegna said eliminating plastic straws is just one of the many sustainable practices at her restaurant. She explained the Blacksmith also uses products, such as carry-out containers and bags, that are either reusable or recyclable.

“It’s the small things,” she said.

Zegna noted she not only wants to continue, but also expand the restaurant’s sustainable practices.

“Being so close to such a fragile ecosystem, I think we should be doing everything we can,” she said.

While this year’s campaign is focused on awareness, Robinson said she hopes the Surfrider Foundation’s “Strawless Summer” initiative will lead to further actions in the future. She added the group plans to present a list of signatures from this year’s pledge to the Mayor and Council in the fall.

“I think you’ll hear more about it as the summer progresses,” she said. “Our task is to get the information out there. The more people share it, the easier it will be.”

For more information on the “Strawless Summer” campaign, the Ocean Friendly Restaurant registration, or to sign the pledge, visit