The request came from Special Events Director Frank Miller on behalf of Ocean City Air Show producer Bryan Lilley. While the Canadian Air Force Snowbirds performance on May 23 is not officially part of the Ocean City Air Show three weeks later, it would provide an early “featurette” as the event was referred to on Tuesday and provide a mid-week, pre-holiday weekend boost.

“They are the Canadian equivalent to the Blue Angels or the Thunderbirds,” said Miller. “They have a gap in their schedule and they are looking for a mid-week stopping point.”

Miller explained the Canadian Air Force Snowbirds have an engagement planned in Anderson, S.C. on May 19-20 and another in Wantagh, N.Y. on May 26-27 and were looking to fill a void in their schedule as they pass through the mid-Atlantic area. 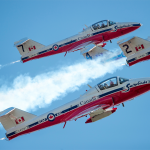 “It would be the first time the Snowbirds appear in Ocean City,” he said. “They’ve never been here before. They looked at us and the U.S. Naval Academy but the Naval Academy backed out. It’s a great opportunity to add a special event with little cost to the city.”

Like their U.S. brethren, the Blue Angels and Thunderbirds, the Snowbirds perform thrilling aerobatic performances and flyovers in Canada and across the U.S. complete with close-quarter formations with smoke trails and other features. The Snowbirds will fly over the resort area on a Wednesday afternoon in May with an aerobatic box with a stage, sound system and other amenities centered at 3rd Street.

Miller said while the Ocean City Air Show producer brought the idea to him, the event would be coordinated by the town’s special events department in cooperation with various allied departments. For example, the U.S. Coast Guard will secure the demonstration area and provide vessels to mark the area. The Maryland Department of Natural Resources may also provide resources on the water, along with the Maryland State Police Dive Team in the event of an emergency.

Unlike the Ocean City Air Show, which stages many of its performers at the NASA Flight Facility on Wallops Island, the Snowbirds would use the Ocean City Municipal Airport as its staging area. Other town in-kind contributions would come from the Public Works Department for the setting up and tearing down of the main stage and other amenities at 3rd Street. The Ocean City Police Department would provide security at the airport and at the venue and the Ocean City Beach Patrol could also be called on to support the event on the beach.

All in all, however, the Snowbirds performance represents a potential bang for the buck in terms of a value-added, free special event for residents and visitors during the middle of the week prior to Memorial Day. Miller said the town’s estimated total hard costs would be around $7,000. The town would also purchase upfront the roughly 6,000 gallons of jet fuel needed by the demonstration team, but would be reimbursed by the CAF Snowbirds likely at a higher per-gallon rate.

“It’s a mid-week event before Memorial Day,” he said. “It’s family-friendly, it will draw fans, many of whom will stay overnight, and it’s a great pre-Memorial Day marketing opportunity.”

Satisfied with the predicted return on investment, the council unanimously approved the special event. Councilman Wayne Hartman praised the timing of the Snowbirds flyover.

“The thing I like about it is it’s a mid-week event,” he said. “I always hear from the business community we need more mid-week events. There are a lot of neat aspects to this. I’d like to explore bringing them back again in the future.”

Miller said that was a possibility with the Snowbirds often touring the U.S. with demonstrations.

“If we do a great a great job with this, I think they would be willing to come back,” he said. “They do have three other mid-week events on their schedule in 2018.”

The Snowbirds performance is slated for Wednesday, May 23 with a window from 2 p.m. to 4 p.m. Miller said the typical show lasts about 40 minutes.

Lower Shore Hospitals Prepared For COVID Surge If It Happens

OCEAN CITY — With Maryland’s key COVID metrics continuing to surge in the wrong direction, Gov. Larry Hogan this week announced more efforts to stem the spread including mobilizing more capacity and staffing at hospitals, but on the Lower Shore, area hospitals appear to be coping thus far.In his weekly press conference on Tuesday, Hogan… Read more »

OCEAN CITY — While no decision was made, public safety officials seemed less than keen on expanding OC BikeFest to a 10-day, two-weekend event with the second weekend overlapping with the unsanctioned and unwelcomed pop-up car rally.OC BikeFest promoter Chase Michael on Tuesday pitched the idea of an expanded Bike Week event in Ocean City… Read more »

BERLIN – Holiday season is in full swing in downtown Berlin.While the pandemic has prompted changes, the town is doing its best to remain festive this December. A successful Ice Ice Berlin last Friday is being followed up with the town’s new Light up Berlin home decorating contest.“The response has been overwhelming,” said Ivy Wells,… Read more »

Worcester County Sheriff: ‘Law Enforcement Officers Are In The Battle Of Our Lives In This Upcoming Legislative Session’

OCEAN CITY — With state lawmakers expected to debate several police reform bills early next year, a local sheriff this week made an impassioned plea not to paint all law enforcement with a broad brush.Following a series of high-profile national incidents this year, there have been calls for defunding police and law enforcement reform in… Read more »