SNOW HILL — History was made last week when Magistrate Mary Margaret “Peggy” Kent was officially sworn in as the first woman to serve on the bench in Worcester County.

Kent, along with Worcester County State’s Attorney Beau Oglesby, was appointed by Gov. Larry Hogan in late December to fill one of two vacancies on the Worcester County Circuit Court bench created by the mandated retirement of long-time Judges Thomas Groton and Richard Bloxom.

Her investiture and official swearing-in ceremony took place last Friday in front of a standing room-only crowd that spilled over into the hallway and an adjacent courtroom.

During the ceremony, Kent was surrounded by her husband of 40-plus years, Tommy Dickerson, and their two daughters, Tory Kate and Molly, along with her parents and other immediate family members. Kent was surrounded by legions of friends and peers with whom she has nurtured lasting relationships over her many years in the community, both privately and professionally as a compassionate and fair, but stern jurist.

Kent served as a domestic relations and juvenile causes magistrate for the First Judicial Circuit since 1996. She began her law career in 1980, working as a staff attorney for the U.S. Environmental Protection Agency. Kent then moved on to work in private practice for Paul C. Ewell, P.A., before starting her own practice in 1991. Kent received her J.D. from the University of Richmond School of Law and her B.A. from the University of Richmond.

“Departing from tradition, the reason we have the opening for Magistrate Kent, soon to be Judge Kent, is the retirement of these two fine gentlemen,” he said. “They served the Circuit Court of Worcester County in fine fashion and the citizens of Worcester County and the state and the First Circuit were lucky to have these two fine jurists. And they reached the mandatory age of senility not long ago, had many good years, plenty of gas left in the tank, but they recently retired, creating this opening, so I’d like to recognize these two fine judges for their many years of service.”

Shockley, whose career timeline has loosely paralleled Kent’s, harkened back to a time when she took the newly created Master’s position and was appointed by then-Judge Theodore Eschenberg.

“I still recall back in 1996 Peggy when you were contemplating the offer of the newly-created Master of Domestic Relations and Juvenile Law position,” he said. “At that time, it was part-time, there were no benefits, no staff and no budget, and sometimes no courtroom. Fortunately for Worcester County and the First Circuit, you were just crazy enough to accept that position and thus began your career as Master.”

“You have exercised your work with dignity for the greater benefit of all and you have demonstrated throughout all of it your passion for justice and excellence in your work,” he said. “Thank you for everything you’ve done. The next Magistrate will have huge shoes to fill and the bench will be greatly enriched by the addition of your skills in all case types.”

Kent was formally introduced by fellow Worcester County attorney and long-time friend Cathi Coates, who pointed out Kent had been a short-list nominee for a Circuit Court judgeship in the past.

“It is indeed a pleasure to be here and a privilege for me to have the opportunity to speak on behalf of my long-time treasured friend on this historic occasion of her investiture and appointment to the Circuit Court bench of our county,” she said. “I’m sure that her family and everyone here shares in my feelings that we have waited a long, long time for Judge Kent to take the bench and I guess it’s true what they say, third time’s the charm.”

Coates went on to praise Kent for her compassion and diligence while serving in the Master position.

“I do want to start by saying there is honestly nobody that I admire more than Peggy Kent,” she said. “The way she handles herself in all that she has accomplished, I pray that I will be able to do her justice today. This is a historic event, for as most of you know, Peggy is the first woman appointed to the bench in Worcester County history. And while the significance of that achievement is not lost on me, I think there may be people who don’t know any better, who will mistakenly think that the fact she is a woman played a significant role in her appointment, rather than the fact she was simply and by far the most qualified candidate to serve as our next Family Law judge. I think it her qualifications and how she got to be sitting here today that really makes this a historic event.”

Coates pointed out the nature of the legal profession is often contentious and adversarial. Nonetheless, Kent’s appointment was supported by an overwhelming majority of her peers around the Eastern Shore and across the state.

“When you become a lawyer, you accept that some people are not going to like you,” she said. “It is an adversarial system that we work in. So it is an incredible feat to practice in a community and sit as Magistrate for 22 years, making decisions in favor of some people and against others in matters involving divorce, custody, alimony, child abuse and neglect and some of the most difficult and contentious cases that come through our courts, and with that history, 99 percent of the people who know her work best endorsed her to become their next presiding judge. That level of respect from your peers is nothing short of remarkable.”

Coates went on to describe the characteristics of a great judge and explained Kent had those attributes in spades, particularly the often-intuitive judicial temperament. 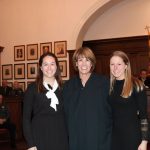 Kent is pictured with her daughters, Tory Kate and Molly, after her oath.

Coates described Kent’s inherent temperament as an omen of sorts for her eventual appointment to the bench.

“She treats everyone she encounters with respect and kindness,” she said. “She is confident, yet humble, compassionate yet firm and she connects with the people she meets and presides over in a truly remarkable way. Her temperament is not something she learned, it was a gift she was born with and she was born to be a judge.”

Coates said the many attributes Kent has shown in her professional and personal life help predict what kind of judge she will be.

“She has shown us what kind of judge she will be, not by her words, but by the way she has treated people over her entire professional career and in her daily life,” she said. “Peggy will not be a good judge. It’s not in her DNA. She will be a great judge and our county is truly blessed to have her.”

For her part, Kent thanked the governor for appointing her, thanked her many colleagues and mentors who helped nudge here career ahead along the way and recognized her husband and daughters and parents, along with her countless friends and supporters. She said she would rely heavily on her weighty experiences as a family court judge as she embarks on her Circuit Court career.

“I promise to serve this county in whatever capacity my administrative judges deem best,” she said. “I promise to educate myself where my knowledge is scant, but you know I have to say and anybody who read my application knows this, I’m just a true advocate of a family law judge, not just because legislatively we have one here, but because there is nothing more important than our families, nothing.”

Kent said she has, on more than one occasion, heard disparaging comments about the importance of family law, but said advocating for families in crisis was no less, and perhaps even more important.

“I have to smile every time I hear someone, usually an attorney, imply that family law is maybe less important than some other aspect of the law, like criminal law,” she said. “And, you know I have to believe that there would be a whole lot less of that if we paid close attention to our families from day one and provided them with the resources and services that they need.”

Kent vowed to bring the same compassion and understanding that has served her well as a family court judge to her new position.

“Our children, our communities deserve somebody, somebodies, who are sensitive to and knowledgeable about the losses and sadness that comes with poverty and addiction and homelessness,” she said. “And I pledge to you that I will address those cases with all of the compassion and the patience and the creativity that I have.”

Finally, Kent said there is perhaps no greater calling then becoming a judge and vowed to dedicate herself to doing the best job she can.

“Judges are the first and foremost public servants and we are charged with upholding the laws created by the legislature, yes, but we are also endowed with a tremendous opportunity to create public trust,” she said. “I hope that folks who appear before me leave my courtroom feeling as if they were seen and they were heard, regardless of whether they disagree with the ruling and that I was humbled and that I listened to them.”