SALISBURY – East Salisbury Elementary School student Jeremiah Ward was sitting at his desk in class on Monday when an unexpected visitor walked through the door. It was his brother.

After months of planning, Army Pfc. Timothy Oradat said he was excited to surprise Jeremiah for Christmas. Since July, Oradat has been stationed at a U.S. Army base in Vilseck, Germany.

“It was a really good Christmas present,” he said, “one that I didn’t think that I was going to necessarily make happen.”

Oradat, a Wicomico High School graduate, said his original plan was to visit his family sometime next June.

Though the two brothers are seven years apart in age, Oradat, 19, described the close bond he has with Jeremiah.

“We are really close,” he said. “Growing up I would always take care of him. I would have to watch him and we kind of grew real close.”

Oradat said it was difficult to keep his homecoming a secret from Jeremiah.

“It was pretty hard,” he said. “I talked to him and all I wanted to do was tell him ‘Hey, I’m coming home,’ because it would light up his day and make his world, but I knew that it would be better if I just surprised him.”

With the help of his mother, Melissa Ward, Oradat said he was able to come home to surprise Jeremiah just in time for the holidays.

“Somewhere around (October) we started planning,” he said. “I called her and mentioned it to her. I told her what I wanted to do and after that we just kind of … talked and made plans for it so I could come surprise him.”

After several flights, a brief layover, and a car ride from New York to Maryland, Oradat said he made it home at 3 a.m. on Monday, just hours before he was due to surprise Jeremiah at school.

Melissa Ward said she was thrilled to have all of her children home for Christmas and shared her excitement for surprising Jeremiah. 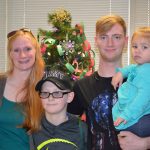 “It’s the best Christmas present,” she said. “I think the smile says it all. He’s happy. He loves his biggest brother.”

When asked how it felt to have his oldest brother home, Jeremiah said he was “excited and happy.”

Oradat said he will be home for three weeks. During that time, he’s made plans to spend the holidays with family and friends.

“It is really good and really exciting to be here …,” he said. “The anticipation and buildup from knowing what is getting ready to happen to finally being able to come home and get a vacation and spend some time at home is really great.”

To view a video of the surprise, click https://youtu.be/JxwfmcwOmVM