OCEAN CITY — The long-awaited dune-style median fence and enhanced lighting project for Coastal Highway got underway this week with a first phase that includes removing all of the trees from the existing median.

After over a year of planning, engineering and contract bidding, the State Highway Administration (SHA) project that will install a dune-style fence down the center of Coastal Highway from Route 90 to Convention Center Drive got underway in earnest this week. The first phase got underway on Tuesday with the removal of all of the existing trees in the center median in the project area. Crews were cutting the tree limbs and shredding them on site and then cutting the trunks down at their bases.

The median fence is expected to improve public safety in the known trouble spot section of Coastal Highway, which historically has seen the most pedestrian-vehicle collisions, by forcing pedestrians to cross the highway at marked crosswalks at street ends and not dash across between blocks. The project, which was designed by SHA with significant input from Ocean City officials has a budget of around $4.5 million for the initial phase. The project features an undulating fence down the center median of Coastal Highway mimicking the iconic fences along the dunes in Ocean City complete with the appropriate landscaping to complete the illusion. No less important is remarkably improved lighting along the corridor with higher wattage LED lights on poles in the center median. 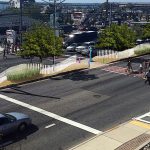 The project was approved by the Mayor and Council last year and was on aggressive track for completion before the 2017 summer season before setbacks in the bidding process stalled it. Just one bid was received for the project last winter that came in significantly over budget, so the project was put out to bid again and moved back to this fall for a start date.

The project got started in Tuesday and is scheduled for completion in late May. The initial work underway this week includes the removal of all trees and brick pavers in the existing median. After that is completed, crews will begin installing the LED overhead lighting, the ornamental fence and new landscaping.

The long-term plan is to construct the median fence from one end of the town to the other. The second phase is tentatively proposed for the section from the Convention Center south to around 26th Street. A third phase would run from 26th Street south to 9th Street. After that, the plan is to start working north from Route 90 to the Delaware line. Of course, funding issues will likely determine the timetable for future phases, but resort officials have repeatedly asked SHA to find a way to keep the momentum going after the first phase is complete.