ASSATEAGUE — After an incident emerged related to dogs going after one of the wild horses on Assateague, National Park Service officials this week are reiterating the importance of the laws regarding pets on the barrier island.

Photos of two dogs harassing one of the famed wild horses on Assateague began circulating on social media platforms last weekend, prompting Assateague Island National Seashore officials to begin an investigation into the incident. Assateague Island National Seashore Chief of Interpretation and Education Liz Davis this week confirmed the incident was being investigated, but could not comment specifically on it because the investigation is ongoing. She did confirm the incident occurred last Saturday, but park officials were not notified until two days later on Monday.

The photos show two dogs, clearly wearing collars, nipping at the hind legs of the horse known as Susi Sole, who was born in the Assateague State Park campground area in 2014 and is known to frequent the developed areas on the Maryland side of the barrier island. While she could not comment specifically on the ongoing investigation, Davis did reiterate the importance of following the rules regarding pets on Assateague. 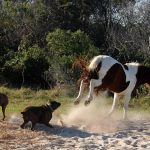 “We do want to emphasize the importance of pet regulations at Assateague Island National Seashore,” she said. “Every pet owner has a responsibility to follow regulations and keep their dog on a six-foot leash at all times. These regulations are in place to protect wildlife, visitors and the dog.”

The incident involving the dogs last weekend comes at a time when Assateague officials are reiterating the importance of limiting interaction with the barrier island’s famed horses. Last month, the popular stallion Jester was struck by a vehicle and killed near the entrance to the park. In addition, the Assateague Island Alliance (AIA) has recently implemented its new “A Fed Horse is a Dead Horse” initiative aimed at preventing the wild horses from accessing potentially dangerous food brought onto the island by their human visitors.

Pets are permitted only in specific areas of the Maryland portion of the barrier island and must be kept on a leash no longer than six-feet at all times. Pets are prohibited in the entire Virginia portion of Assateague even in a vehicle as well as all back-country campsites, nature trails, lifeguard-protected beaches, portions of the Assateague State Park and the entire area north of the state park.

WEST OCEAN CITY -- The cause of a fatal fire in West Ocean City late Monday night has been determined to be accidental and caused by a heating appliance placed too close to combustibles. Around 10:50 p.m. on Monday, a Worcester County Sheriff’s Deputy patrolling in the area of Elm Street in West Ocean City…

FENWICK ISLAND – A review of archeological studies, cost estimates and timelines highlighted a recent dredging meeting in Fenwick Island. Last Friday, the Fenwick Island Dredging Committee met to discuss the next steps in a long-awaited dredging project of the Little Assawoman Bay. As the town continues to pursue a partnership with Seatowne, a residential…