More than 50 people — landowners, developers, investors and the like — participated in the Oct. 26 bus tour. The tour, which was hosted by the Worcester County Economic Development Department, highlighted properties in Pocomoke, Snow Hill and West Ocean City.

“We took this on as our own and we worked hard on developing a well-run, well organized, productive tour,” said Merry Mears, the county’s director of economic development. “It’s rewarding to know people realized the value of it and invested time in it.”

Mears said that while this was the third time the county hosted a commercial real estate bus tour, this was the first time it had been entirely organized by her office, without the services of a consultant. That cut costs associated with the event significantly and at the same time gave Mears and her staff the chance to develop relationships with the various parties involved.

This year’s tour was scheduled for Oct. 26 to coincide with the completion of the water and sewer expansion at Riddle Farm. In the past, developers have passed on opportunities in the West Ocean City corridor because water and sewer capacity wasn’t immediately available.

In addition to highlighting properties available in the vicinity of Riddle Farm, last week’s tour showed attendees sites in Snow Hill and Pocomoke.

“We felt it was important to make this county-wide,” Mears said. “The reason we extended it down south is because we have a significant manufacturing hub there and we wanted to let people know about it.” 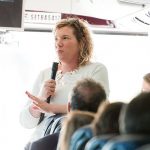 The tour bus made stops in Pocomoke and Snow Hill first before visiting the north end of the county. As the bus approached each town, Mears showed passengers an aerial video of the community and its available properties. She also had officials from each town offer insights and thoughts on what made each area special.

Throughout the day Mears and her staff answered questions about things like zoning and beach proximity. They also provided their guests with a binder of available properties and the zoning and contact information for each. The tour ended with a reception at Seacrets Distilling Company where participants were able to network.

“A lot of people were there, in one place,” said property owner Adham Abouassali. “It was helpful.”

Abouassali, who bought 245 acres in Berlin in 2015, said he took part in the tour to meet people he might work with as he moves forward with developing his property.

“When you talk to people face to face, there’s a lot of information you get,” he said. “I’d love to see the county continue to do this. It’s very helpful to get people together. Networking is a key to getting things done rather than scouting the horizon on your own.”

Mears said the tour proved that her office could perform the key role of generating discussion that would lead to economic development.

“It spoke volumes to me,” she said. “Our development community really needs a regular forum to come together.”

As a result of the tour, conversations are already underway regarding plans for the long-vacant Pocomoke Crossing property.

“There has been all kinds of extra activity that’s occurred because of this event,” she said.

Mears said the bus trip also facilitated discussions among developers and north Worcester County property owners. She’s hopeful that relationships established during the tour will help increase activity in the area of Home Depot in the near future.

“I see that happening sooner rather than later,” she said.