BERLIN – The fitness craze sweeping the nation made its way to Bishopville this week as a local farm paired the peace and calm of yoga with a trio of spunky kids — kid goats that is.

Goat yoga, a phrase that will leave many scratching their heads, is in fact one of the latest fitness trends. The concept has made its way to yoga classes across the country during the past year.

“Goat yoga is a great thing because it allows the students to connect with the animals,” said Chrissy Ehrhart of Zenna Wellness Studio. “It allows us to practice cultivating a heart of kindness and compassion. It’s also super fun.”

Ehrhart partnered with Megan Hines of Naturally Sunkissed Farm in Bishopville to host a goat yoga session, with proceeds benefiting Future Farmers of America, on Wednesday. Hines said her family’s farm was home to two goats who’d both had babies this summer. In conversations with Ehrhart, whose yoga sessions she attends, the two decided to bring the practice to the farm.

“It was a mutual excitement,” Ehrhart said, “and we saw a demand.”

And so on Aug. 30 Ehrhart led a sunset yoga class in a grassy field as the handful of goats who call the farm home meandered among participants. While the mother goats — fondly known as Totes and Oats McGoats — stayed busy munching grass, their kids — Whiskey, Rye and Maggie Moo — jumped on and around the women on their yoga mats.

While perhaps not as calming as the average session, there was plenty of laughter as participants went through their poses amid the jumping and bucking kids. Class was interrupted briefly as Oats tried to make off with a woman’s shoe.

Berlin resident Megan Gsvind said she was thrilled to be able to experience goat yoga.

“I’ve seen this happening all over other states,” she said. “I’m so excited it’s happening here. I love goats.”

Aside from being near cute baby animals, Ehrhart says goat yoga gives people the chance to be outdoors and experience nature firsthand. It’s also a good way for people to ensure they’re not putting off negative energy.

“This is a good practice of centering your energy because nothing with pure non-judgmental energy will be drawn to bad vibes,” she said. 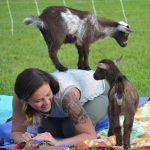 Kimberly McArdle gets in a laugh during this week’s goat yoga session.

“They like to climb on people and be social,” she said.

She said that while there was the possibility the farm would host goat yoga again in the coming weeks, she doesn’t expect it to become a regular occurrence, as the kids will grow up. They’re meant to be milk producers for the Hines family.

“They’re Nigerian dwarf goats and they can produce up to three-quarters of a gallon of milk a day which is a lot for their size,” Hines said.

For now, however, the animals are proving to be successful yoga partners. Ehrhart, who also teaches yoga on the beach and in local pools as well as in her studio, says the 25-person goat yoga class had a waiting list within days of being scheduled. She said people were eager to connect with animals as well as nature.

“My teachings are always a practice of gratitude and connecting with your inner self and the world around you,” Ehrhart said. “It is important in this day and age to connect with one another in loving, compassionate, non-reactive ways to reset the momentum of this world into a better spin.”