OCEAN CITY — The tornado or microburst that touched down in West Ocean City on Monday evening followed a distinct path and a trail of destruction roughly from the Ocean City Airport through West Ocean City and across the bay to 14th Street and Harbour Island, site of the 44th Annual White Marlin Open on the tournament’s first day.

Shortly before 5 p.m. on Monday, the National Weather Service issued a tornado warning for much of Worcester County and advised citizens to take shelter immediately. About an hour later, a tornado or microburst, which has not yet been clearly defined by the National Weather Service, impacted the Ocean City Airport in West Ocean City, downing trees and damaging one small airplane.

A large tree upended at the airport, falling on and damaging at least two rental cars belonging to a satellite rental car agency at the facility. In addition, a small plane that had just landed prior to the tornado warning was bounced around on the runway and suffered damage, according to airport manager Jamie Giandomenico. The two men aboard the plane immediately sought shelter upon arrival with the tornado warning posted and the aircraft was not completely secured before the high winds landed in the area.

“It was very, very localized,” he said. “It was super intense for maybe 90 seconds to two minutes. Then, it was gone just like that.”

The storm cell followed a path through West Ocean City down Elm Street and through the Francis Scott Key Resort and across Route 50 through the outlets and the area of the Wine Rack before crossing the bay and making landfall again at 14th Street and the Harbour Island community, host of the White Marlin Open (WMO).

Ordinarily, Harbour Island and the WMO would be packed on the tournament’s first day with would be packed with thousands of spectators, but steady downpours all day and the relatively small number of boats fishing kept the crowd numbers down for the most part, although there were still hundreds of spectators milling about along with workers in the various vendor, food, apparel and drink tents and at the host Reel Inn.

According to witnesses, the sound of the sudden wind event was intense as it touched down again at 14th Street. Tents were blown away, the kiosk at the fuel dock was destroyed and heavy metal trash cans were picked up and dumped into the bay. At the Harbour Island community pool, lounge chairs and heavy tables were picked up and tossed around. At least one unidentified woman suffered a serious injury to her finger that required paramedic attention. 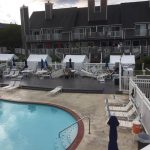 The pool around the Harbour Island community is pictured after a storm rolled through Monday.

Ocean City Communications Manager Jessica Waters was at Harbour Island when the sudden storm made landfall and took shelter along with dozens of others.

“It was a frightening couple of minutes as we watched the port-a-potties and trash cans fly through the air,” she said. “Thankfully, a resident of Harbour Island let us seek shelter in her garage.”

Waters said she believed there was no significant damage from the city’s perspective, although a damage assessment was being undertaken on Tuesday morning.

Fish in OC owner and Hooked on OC television show host Scott Lenox was also at Harbour Island recording the action at the scale, such as it was on a rather light first day because of the weather and was also caught up in the “insane” weather situation.

“When I use the word insane to describe the first day of the 44th annual White Marlin Open, I don’t mean it in the big fish, lots of fish, awesome action kind of way,” he said. “I mean it in its literal sense. It was a run for cover, Noah’s Ark, hold with both hands kind of way. ‘I’ve never been in a tornado’ might be words that I can’t say tomorrow [Tuesday] because I just may have been.”

Earlier on Monday, an official tornado, according to the NWS, touched down in Salisbury near Route 13, flipping vehicles and damaging dozens of buildings.