OCEAN PINES – The president of the Ocean Pines Association’s board of directors abruptly resigned from the position this week.

The association announced late Wednesday afternoon that Tom Herrick, the board’s president, had resigned from the position and that Dave Stevens, the board’s vice president, would take on the role.

In an interview Thursday morning, Herrick said the “havoc and turmoil” created by other directors prompted his resignation.

“To be perfectly frank, it’s fair for the members to know, that it’s specifically related to the conduct displayed by two sitting directors,” Herrick said. “Being president I was forced to deal with this conduct on a daily basis … It became too frustrating to continue in that role.” 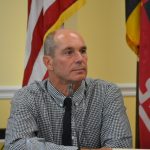 This month, Hill put forward a motion to remove one of his fellow directors, Slobodan Trendic, from the board altogether. Though the motion was scheduled for the board’s July 28 meeting, it has since been postponed. Herrick said the motion, which can only pass with a 5-2 vote by the board, had been postponed because one director would not be present Friday. He said the board was working to set a date for a special meeting at which the motion could be considered.

Though he has resigned as president, Herrick will remain a member of the board. He said that he wanted to fulfill his commitment to the members who elected him in 2015 by completing his term, which ends in 2018. He said serving as president on a board with two members creating turmoil was simply too much of a burden.

“Life is short,” he said. “The president is the one who has to deal with this on a daily basis. It took too much from me and my family.”

Herrick stressed that he was committed to completing his three-year term though and said he hoped the board would change for the better following this summer’s election. Four people — Colette Horn, Nicole Crosariol, Doug Parks and Marty Clarke — are running for the seats currently held by Parks and Stevens. Election results will be announced Aug. 12 at the Ocean Pines Association’s annual meeting.

“I’m hoping when the new board comes in we’ll start moving in a positive direction,” Herrick said.