OCEAN CITY — Resort officials this week reversed course and approved, although somewhat reluctantly, a proposal to install as many as 12 new cell phone towers on the Boardwalk after getting assurances the project included increased lighting and security cameras.

Back in April, the private sector company Crown Castle came before the Mayor and Council requesting permission to install 19 additional Distributed Antenna Systems (DAS), or cell phone towers, including 12 on the Boardwalk and seven more side streets between Baltimore Avenue and Philadelphia Avenue. The DAS towers are expected to expand bandwidth, relieve congestion and improve service for cell phones and other mobile devices in the south end of the resort on the beach and Boardwalk, particularly during the congested summer season.

While no one objected to improving service, the council at that time rejected the idea of installing more DAS antennas on the Boardwalk at all and sent Crown Castle project designers back to the drawing board. In the initial proposal, the DAS systems included antennas mounted on existing infrastructure on the Boardwalk such as sign posts and light fixtures, for example, along with cabinets on the ground level hosting equipment needed for the antennas in some areas.

On Tuesday, Crown Castle came back with a revised proposal after consulting with City Engineer Terry McGean and City Manager Doug Miller and actually walking the Boardwalk and looking at each proposed location individually. McGean said on Tuesday the company had made an effort to conceal the antennas and associated equipment to the greatest extent possible.

“The Mayor and Council had concerns about aesthetics, particularly on the Boardwalk,” he said. “Crown Castle has come back with a proposal they believe will address the council’s concerns.”

During the presentation in April, some on the council pressed Crown Castle to install the DAS antennas on buildings and other higher structures and out of the sightlines for the visitors and residents along the Boardwalk. However, Crown Castle’s Richard Rothrock explained on Tuesday the signals from antennas mounted on buildings and water towers, for example, dilutes quickly and does not always reach users on the beach and Boardwalk. For that reason, Crown Castle came back with a proposal for 12 sites along the Boardwalk and attempted to disguise them somewhat with “stealth” designs where possible. 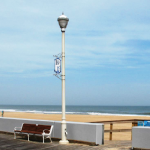 “These are equipped to handle more than one carrier,” he said. “The small cells are ideal for areas with geographic issues like buildings or other natural features that block the signal. Large crowds overwhelm the capacity of the larger towers in densely populated areas, which is what you have here in the summer.”

However, not all on the council on Tuesday were satisfied with the explanation and continued to press for no new DAS equipment on the Boardwalk.

“I think we specifically asked you not to put any cells on the Boardwalk,” said Councilman Tony DeLuca. “We gave you alternatives and suggested you go to the west side of the Boardwalk and yet you came back with what appears to be a similar proposal.”

Crown Castle’s Trey Spear explained the buildings and other structures along the west side of the Boardwalk created challenges for DAS systems.

Rothrock said the Crown Castle’s DAS antennas will provide service for multiple carriers such as Verizon and Sprint, for example. He said the company was trying to accommodate the aesthetic wishes of the Town of Ocean City, but was also beholden to the wireless service providers the systems would serve.

“We’re trying to minimize our footprint,” he said. “We want to utilize areas where the town already has some infrastructure in place such as equipment on poles, signs and cameras, for example.”

“I’m surprised you came back with a similar proposal,” he said. “You mentioned your carriers, but we have people we’re responsible to also and I don’t think they want these poles. I think this is the wrong direction for Ocean City.”

Crown Castle’s J.D. McCloskey countered the DAS systems were needed to meet the growing demands for wireless service in the resort, especially in the summer months, and pointed to statistics to prove his point.

James, however, was not convinced.

“I understand that,” he said. “The last time you were here, we told you we did not want them on the east side of the Boardwalk.”

Councilman Dennis Dare pointed out the antenna “shrouds” mounted on light poles were not offensive, but had a problem with the cabinets on ground level that house the equipment to service them. In many examples, the DAS antennas mounted on poles also include equipment cabinets on the ground nearby resembling the ubiquitous power boxes throughout the resort. Dare said he wanted every effort made to eliminate the need for more cabinets where possible.

“Those that are mounted on light poles aren’t aesthetically displeasing,” he said. “What I don’t want to see is more of those cabinets at ground level. I don’t like the cabinets that are existing and don’t want to add more.”

The simmering tension eased somewhat when Crown Castle officials started showing the Mayor and Council specific examples of the proposed designs. In many examples, the cabinets in the original proposal have been removed and instead the necessary equipment is now housed in a decorative “integrated base” on the poles mimicking the base of the traditional light poles along the Boardwalk.

As an added bonus, in most examples where the DAS antennas are mounted on light poles along the Boardwalk, additional fixtures will be added at Crown Castle’s expense, which will improve lighting along certain sections of the Boardwalk. In addition, Crown Castle has also agreed to mount more security cameras on the fixtures as part of the town’s City Watch surveillance system on the Boardwalk.

After considerable debate, Councilman Wayne Hartman made a motion to approve the revised designs for the 12 DAS antennas on the Boardwalk and the seven on side streets under certain conditions, including the integrated lamp post bases, extra lighting fixtures where possible and extra security cameras where possible at Crown Castle’s expense. The council approved the motion 5-2 with James and DeLuca opposed.

Mayor Rick Meehan praised Crown Castle for returning with a proposal that minimized the aesthetic impact of the fixtures while meeting the demands for wireless service in the resort along with the additional lighting and security cameras Ocean City will gain in the project.

“I know not everyone is 100 percent satisfied but we’ve come a long way,” he said. “You listened to what the council said the last time and took some of the heat and then came back with ways to make these more compatible. You’re going to increase lighting on the Boardwalk, which we all appreciate, and adding the cameras helps with our public safety commitment.”