The bathtub sponsored by H.T. Harrison & Sons Inc., a Rockville roofing company, proved to be the fastest in Friday’s races down Main Street. The victory capped off an exciting birthday for Capri Harrison, whose son Travis pushed the tub.

“I’m so excited,” Harrison said. “They worked really hard. My son doesn’t give up.”

Harrison said she and her husband recently bought a home in the area in hopes of eventually retiring to the Eastern Shore. Because the bathtub races were set to take place on her birthday, July 7, she asked her family to put together a tub and team. Her son agreed to push the bathtub and his girlfriend, Brooke Chambers, agreed to steer it. Harrison said in spite of the fact they were one of just three new teams competing in this year’s event, she was optimistic about their chances.

“We did some practice runs at home,” she said. 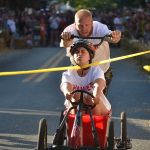 And so as she and the rest of her family joined the hundreds of people crowding against the straw bales lining Main Street, Travis Harrison and Chambers faced off against nine local teams. Inexperience wasn’t an issue as they came out ahead every time, finally beating the Costa Ventosa team to win the rubber duck cup.

“What a great birthday,” Capri Harrison said, adding that she was looking forward to spending more time in Berlin in the future. “This is such a wonderful town.”

According to Larnet St. Amant, director of the Berlin Chamber of Commerce, this year’s Berlin Bathtub Race was such a success she’s considering turning it into a full-day affair next year.

“We’re looking to make it bigger and better,” she said.

For the first time this year, the Friday evening event included a children’s activity—a hula hoop contest—that drew a lot of interest from the youngsters in attendance. Winners were treated to gift cards donated by Island Creamery.

She said the amount of work associated with setting up for the races—particularly setting up the 200 straw bales that act as a buffer between Main Street and onlookers—and the festival-like atmosphere of the annual event encouraged her to consider ways to expand on it for next year. Extending the event over the course of a day would also provide more people with the opportunity to attend.

“We were at capacity as usual (Friday),” St. Amant said.

Whether the overall event undergoes any changes or not, she expects the bathtub races to remain a source of friendly competition among local merchants, particularly since the Harrison family displayed their trophy during dinner at the Atlantic Hotel Friday and later that night at Burley Oak Brewery.

“Everybody likes to have bragging rights,” St. Amant said. “It gets everybody fired up. It’s just good old-fashioned fun.”