SNOW HILL – A new program at Furnace Town Living Heritage Village is giving visitors a chance to expand their knowledge of local history.

Furnace Town is now offering Folk School several times a month. The new program, launched in May, gives attendees the chance to learn skills like broom making and weaving from Furnace Town’s artisans.

“We’ve given guests the opportunity to learn from our artisans,” said Patrick Rofe, executive director of Furnace Town.

Rofe said the Folk School concept had been germinating for several years and that officials decided to finally give it a try this year. Since May, Furnace Town has hosted three Folk School events a month. Typically held on Saturdays, the sessions allow those with an interest in 19th century history to learn key trades from the time period. So far, Furnace Town has hosted weaving, broom making and printing classes. Participants are able to learn from Furnace Town’s regular artisans.

“The beginning techniques are quite simple,” Rofe said, adding that because of that students were able to take a small creation of their own home by the end of each class.

The classes, open to all ages though ideal for teens and adults, allow Furnace Town’s artisans to share skills not widely known anymore. 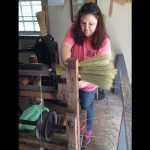 While attendance has been a bit slow so far, Rofe expects it to increase as Furnace Town begins to market Folk School. So far, promotion has primarily been through social media. Those who have attended, however, have enjoyed themselves, Rofe said, and expressed interest in other classes. Those who came to a recent broom making session, for example, caught a glimpse of Furnace Town’s blacksmith at work and now plan to attend that session of Folk School.

By hosting the classes, he says Furnace Town is fulfilling its mission of preserving local heritage and encouraging more local involvement.

“It gives us a deeper connection with the community,” he said.

Rofe said the new program — made possible because of grants from the Community Foundation of the Eastern Shore and the Worcester County Arts Council — was another unique initiative Furnace Town could provide.

“It’s a sign of the organization looking forward and looking to grow,” he said.

Folk School is just one of the new 2017 programs underway at Furnace Town. The organization is also hosting the Americana Music Series this year. The series consists of four bluegrass concerts. Based on attendance at the first two, Rofe expects concerts slated for Aug. 6 and Aug. 27 to draw crowds to Furnace Town.

Rofe explained that the series ties in to Folk School, as next year, it will feature music classes. Participants will be able to learn the songwriting and musical traditions of the 1800s.

“It will grow to the point it will encourage people to come to the area,” Rofe said. “It’s another opportunity to strengthen ties with the community.”