SNOW HILL – After years of dealing with an overcrowded building plagued by plumbing, heating, ventilation and air conditioning problems, students and staff at Snow Hill High School now have a state-of-the-art facility to call their own.

While the baseball and softball fields are still under construction, work on the Snow Hill High School (SHHS) building itself is now complete. Principal Kim Purvis said students were thrilled with the expansive facility. 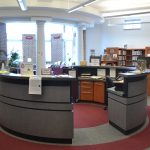 The new media center is shown. Photo by Charlene Sharpe

“They’re very excited,” she said. “They’re overwhelmed with the newness and the amount of space.”

The $50 million renovation and addition of SHHS began in January 2014 and was completed in December, according to Oak Contracting, the company managing construction. The project expanded the 70,657-square-foot school, which was built in 1957, to 122,310 square feet. With 10 additional classrooms, trailers will no longer be needed to accommodate students.

Visitors to SHHS are now greeted with the same sweeping entrance and naturally lit hallways seen at Stephen Decatur and Pocomoke high schools. Joe Price, the school system’s facilities manager, says that because the original Snow Hill and Pocomoke schools were similar in layout the new facilities at each location also have similarities.

“But with the different exterior and different finishes it looks really different,” he said.

Highlights of the new SHHS include a geothermal heating and ventilation system, an expanded cafeteria and expanded auditorium as well as a new gym. The gleaming 11,660-square-foot gym is used primarily for games while the old gym has been renovated and provides practice space for the school’s array of athletic teams. It’s even been outfitted with a batting cage and wrestling mats that can be lowered from the ceiling. 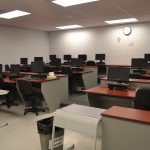 The new computer lab at SHHS is pictured. Photo by Charlene Sharpe

“Prior to this a lot of our sports had to work around each other,” Purvis said.

Between the two gyms lie a trainer’s office, a health classroom and an ultra-modern fitness room. Purvis comes across students and staff using the various exercise machines before and after school.

“The kids really enjoy this,” she said, adding that previously all they’d had access to were a few free weights.

The trainer’s office — which in the old building was essentially a closet — also features a number of high-tech pieces of equipment.

On the academic side of the building, SHHS now has a total of 33 classrooms, each equipped with a smartboard and new furniture as well as other relevant equipment. New student desks feature hooks for hanging backpacks on along with chairs that can be stacked on top of them at the end of the day.

The tech education classroom is outfitted with heavy duty tables, an area for robotics and even a 3D printer. The adjacent art classroom includes a kiln for ceramics and features a number of windows.

“The art classroom in the old building was in the middle which meant no natural light,” Price explained.

While students and staff love the new building, one of its biggest benefits isn’t even visible. Purvis says the school’s now-reliable internet access is appreciated by everyone, as it plays a part in just about everything these days.

“The entire building has Wi-Fi,” she said. “Our internet access was pretty spotty before.”

Outside, the new school is surrounded by a new bus loop, student parking area, tennis courts and stadium complex. Baseball and softball fields, situated behind the building, are expected to be complete in April. 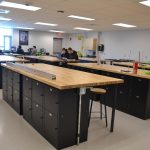 The stadium complex, which includes a support building and new bleachers, is highlighted by a turf athletic field encompassed by a running track. Passersby may have noticed what appear to be two dogs on the football field. Daniel Rosas, assistant project manager for Oak Contracting, is quick to explain that they’re actually fake coyotes.

“When we were building the building this was kind of our construction storage area,” he said. “There were a whole bunch of seagulls that were everywhere.”

Attempts to shoo them away were fruitless as the birds always returned. Oak Contracting contacted the company that had installed the field and asked what they could do. They suggested coyotes.

“They’d contacted the Seattle Seahawks of the NFL and they had the same problem and the Seahawks said they got one of those coyotes and they’ve never had another bird,” Rosas said. “So the Snow Hill athletic director decided he wanted two of them and we haven’t seen a seagull since.”

Rosas said that overall, the entire SHHS project went smoothly. Price agreed and pointed out that that was in spite of the fact that the construction site was in the middle of a residential community.

“We built this school in the middle of town, with all these houses around, and I’ve gotten no complaints,” he said.

Rosas said he’d fielded lots of questions from neighbors interested in the school’s progress during the past two years. 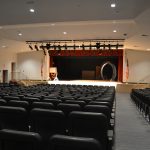 Purvis says that’s because the new school is something the entire town can be excited about.

“The community is just as much a part of the project as the students and staff are,” she said.