BERLIN- Worcester Prep’s girls’ varsity basketball picked right up where they left off this week, routing Holly Grove, 48-7, in the first game since the holiday break to remain perfect at 9-0 on the season. 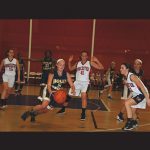 The Mallards beat the Eagles in the season opener way back in November 30 and reeled off eight straight victories to start the season 8-0. Back in action on Wednesday at home, the Worcester girls showed little signs of holiday rust as the cruised past the Eagles, 48-7.

Worcester led 14-2 after the first quarter and expanded its lead to 26-5 by halftime. In the second half, the Mallards continued to pull away for the 48-7 win as Holly Grove had few answers. The Eagles played hard as they always do, but they were overmatched by Worcester’s athleticism on both ends of the floor on Wednesday.

The average margin of victory for Worcester in the last there games spanning the holiday break has been around 30 points. After a fairly close 33-23 win over Delmarva Christian, the streak now includes three blowouts including a 46-17 win over Salisbury School and a 47-19 win over Salisbury Christian. The Mallards face Salisbury Christian again next Monday on the road before a showdown with old rival Saints Peter and Paul next Wednesday at home.