BERLIN – A signalized crosswalk will be installed on Route 50 in front of Stephen Decatur High School in an effort to increase pedestrian safety as commercial activity picks up at the busy intersection.

With the new Arby’s restaurant complete and the adjacent Royal Farms to open Dec. 29, there will be more people crossing the highway on foot. Though school system leaders said this fall they would be discouraging students from crossing the highway, in early December they formally asked the Maryland State Highway Administration (SHA) to install a crosswalk.

“Initially the school had requested SHA not install a crosswalk for fear large groups of students would cross US 50 to patronize the store,” said SHA spokesman David Buck. “More recently, the school has asked SHA to move forward with pedestrian improvements, understanding that regardless of the presence of a crosswalk, the students may still choose to cross US 50.”

In a letter to SHA officials on Dec. 6, Lou Taylor, superintendent of schools, said the school system wanted to be proactive. 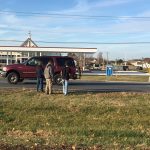 “As both the Stephen Decatur High School and Berlin communities are likely to be patrons at the incoming retailers, we feel it is important to be proactive in safeguarding our students and their families …” the letter stated.

Taylor added that the construction of Oceans East, an apartment complex on Seahawk Road, was set to begin in the near future and “could also cause an unprecedented influx of walkers.”

Buck said SHA would first install a crosswalk and related signage along Route 50 in both directions.

“We anticipate this being complete by the end of January though the installation of the thermoplastic tape needed for the crosswalk is temperature dependent so the date may change,” he said.

SHA will also be adding an audible component to the crosswalk for the visually impaired as well as countdown pedestrian signals. Buck said that would occur in the next year.

“This requires additional design and engineering as signal timing is adjusted, new conduit has to be installed, utilities may be impacted, etc.,” he said.

The County Commissioners, who were advised of the coming crosswalk and pedestrian improvements at this week’s meeting, praised the news. Commissioner Ted Elder, a school bus driver, said he visited the busy intersection several times a day.

“It’s an accident waiting to happen,” Elder said. “It’s going to be a tragedy if we don’t get something done.”