OCEAN CITY — Despite a request from federal Army Corps of Engineers to expedite the project, resort officials this week denied a request to allow the next cycle of beach replenishment planned for later this year to occur during the peak summer months.

The last regularly scheduled beach replenishment project in Ocean City was conducted in 2014, making 2018 the next phase in the regular four-year cycle. However, Ocean City was hit with a number of severe coastal storms during the offseason last year, including Tropical Storm Joaquin in October 2015, followed by Winter Storm Jonas last January with the latter causing an estimated $21 million in damage to the resort’s beach and dune system.

A series of quick-fix repairs were undertaken last spring and repairs to the dune crossovers and fencing continued through the summer and into this fall. The Army Corps of Engineers, along with its state partner the Maryland Department of Natural Resources (DNR) and the Town of Ocean City, have been planning for the next phase of the beach replenishment project, which has been moved up to 2017 after the damage caused by coastal storms last year.

However, the Army Corps of Engineers in October asked the Town of Ocean City to consider relaxing a provision in the contract that prohibits beach replenishment work, with its vast network of pipes, bulldozers and other equipment during the months of July and August. Since 2002, by agreement with the Army Corps and the DNR, language in the contract for beach replenishment has prohibited work on the beach during July and August.

The contract was written to allow a lengthy completion time, excluding those two months, which gave the contractor good scheduling flexibility while keeping the competitive bid prices down.

Based on the current timetable, the most optimistic schedule for starting the 2017 beach replenishment project would be May 15, 2017, or just weeks before the summer season. City Engineer Terry McGean told the Mayor and Council this week the Army Corps would like to begin the project in May and continue through the summer months, but McGean and staff were recommending keeping the restrictions for July and August in place, as spelled out in the current contract.

McGean told the council on Tuesday although the damage from a series of coastal storms last winter was significant, natural processes with some man-made emergency repairs, had restored the beach to its desirable height and width in most places, although the major beach replenishment project is still needed. 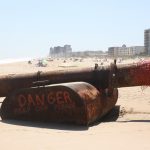 “Last winter, we suffered severe storms and there was a substantial amount of erosion,” he said. “We were able to repair the dunes, but we still do need beach replenishment. The fastest the Corps believes it could start the project is May 2017 and it’s a 90-day project. Based on the timeframe and the new survey information, we are recommending the prohibition remain in place for July and August. That would mean the project could not start until September.”

The project is dependent on the federal funding contribution, and although beach replenishment has been fully funded in the past, the 2017 project has not yet been approved for the current cycle.

“Right now, we still don’t have funding officially for the project,” said McGean. “We’re still working on that. The vast majority of the beach does meet the minimum standards although there are a couple blocks up north that are still a little low.”

Longtime residents and visitors will likely remember the nascent days of beach replenishment nearly three decades ago when the early phases of the project were completed during the summer months. McGean said back then, the beach replenishment project was considered a tourist attraction, despite the inconveniences, but it has since lost its appeal as a novelty and is best completed during the offseason.

“The first time it was done in 1988, it was a neat, new thing,” he said. “People enjoyed seeing the pipes on the beach and the whole process. A similar situation occurred when they did beach replenishment again in 1994 and 1998, but the novelty had worn off and people didn’t want to see the pipes and the bulldozers on the beach.”

The council voted 7-0 to keep the restrictions for July and August in place. McGean said the beach was nearly restored in most areas. Recent survey work on the beach is showing there has been significant build-up over the summer and fall and most areas are now at or above the minimum design template. Barring a severe Nor’easter this winter, McGean believes the beach is sufficiently wide enough to weather the winter, spring and next summer, allowing the next phase of beach replenishment to be conducted starting next September.

However, if a storm causes significant damage during the next several weeks, there is still time to alter the timetable.

“The earliest that the Corps can put bids out on the street for this work is Feb. 1,” he said. “If Ocean City does experience severe beach damage between now and then, the bid documents could then be revised to allow work in July and August as needed.”