OCEAN CITY — With the clock ticking toward Tuesday’s municipal election, a late write-in effort for a candidate with a familiar name in resort politics has been launched for one of the four City Council seats, but it appears there might be no mechanism in the city election code to pull it off.

Supporters have launched a late write-in campaign for former Ocean City Councilman Vince Gisriel, Jr., who served on the council for 14 years. Gisriel said on Friday he is aware of the late effort to forward him as a write-in candidate for one of the four open City Council seats, but it didn’t start with him.

“I’ve heard there is an effort underway to do it, but I’m not organizing it,” he said. “It came up as an afterthought and some people are trying to organize a late push for a write-in campaign.” 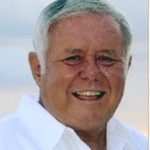 The four incumbents, including Doug Cymek, Dennis Dare, Tony DeLuca and Mary Knight, all filed for re-election way back in January. Another candidate, local business owner John Gehrig, joined the race on the filing deadline day. With just days remaining until Tuesday’s municipal election, it still appears to be a five-horse race for four seats, but a late write-in campaign on behalf of Gisriel could ostensibly expand the field, or at the very least siphon votes from the other candidates.

“Frankly, I’m flattered by it,” he said. “I’m not knocking on doors or anything like that. If the community saw fit to elect me, I would be honored and duty-bound to serve again.”

The late write-in effort is being led by Tony Christ and a handful of citizens associated with the Ocean City Taxpayers For Social Justice group. Christ wants to see the incumbent group broken up and Gehrig and Gisriel elected.

“I am wholeheartedly leading the charge and I’m proud to do it. It’s really my pleasure. It’s a crapshoot I understand this late in the game, but Vince is a polar opposite of what you have now at City Hall,” said Christ. “He watches every penny and this council certainly does not do that. He has a viable chance to break up the lapdogs. It’s a spur of the moment type of thing here, and we are going grassroots and word of mouth trying to get him in there between now and Tuesday. I personally plan to vote in Virginia first thing and come to Ocean City and join everyone else who will encouraging the write-in for Vince.”

However, it appears there might not be a mechanism for a write-in candidate in the town’s election process. Reached Friday, City Clerk Diana Chavis, who manages the town’s election process, said there is nothing in the charter in regard to write-in candidates. In Ocean City municipal elections, residents cast their votes by pulling a lever in an old-style system. There’s no mechanism within the voting boxes for a write-in vote to be cast, according to Chavis.

“We don’t have a provision in our charter for a write-in candidate. The ballots are set up and the machines are programmed for the ballot as approved by the Mayor and Council,” Chavis said. “Absentees ballots have already gone out and everything is well in place.”

Gisriel served on the City Council for 14 years and gained a reputation as a fiscal watchdog of sorts. He was employed by the state of Maryland for nearly four decades, serving 28 years as an assessor appraising real estate. During his 14 years, Gisriel was often on the short end of a lot of 6-1 council votes, but he always asked the difficult questions and spurred debate even when it appeared the majority had already decided on an issue.

Even after his years of service, he has remained a fixture at City Council meetings. Gisriel often calls into question some of the council’s decisions during budget deliberations. Most recently, he has been outspoken about the city’s reserve fund in excess of what is required by policy and has sought a return of some of the funds in the form of tax relief for the citizens.

Gisriel has also spoken out about the proposed redevelopment of the old Cropper concrete plant site just north of the Route 50 bridge with a mixed-use project including an eight-story hotel that will forever change the downtown bayfront landscape. He also led a recent effort to stem Delmarva Power’s use of “smart meters” in the resort and the list goes on and on.

Gisriel said on Friday he did not plan on seeking election, but almost always considers it when the municipal election cycle returns every two years.

“Having been in politics, every time the deadline approaches I get those pangs to run again, but I didn’t consider it in this cycle,” he said. “All of a sudden this kind of presented itself and we’ll see how it plays out. Again, frankly I’m flattered and I’d be honored to serve.”

Gisriel said he had not intended to show up at the polls on Tuesday, but the late write-in campaign might change his plans.

“I don’t know,” he said. “I hadn’t planned on it. I guess I’ll see how this plays out and if it gets some legs, I’ll make a decision as the day grows closer.”