BERLIN – Fourth-graders in Worcester County learned the true meaning of technology with a trip to Furnace Town this week.

While the word typically brings to mind things like iPads and cell phones, educators used a visit to Furnace Town to show students that technology existed in the 19th century too.

“Our kids think technology has to be plugged into a wall,” said Marlyn Barrett, a coordinator of instruction for the county’s schools. “Technology is any system, any process, that makes life easier.”

During Worcester County’s first STEM (Science, Technology, Engineering and Math) Fest, Barrett and her peers brought the county’s fourth-graders to Snow Hill’s old iron furnace to show them the technology of the 1830s. Sixteen stations taught children about everything from woodworking to weaving to candle making. 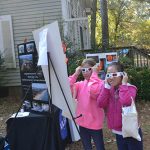 Students use glasses to view 3D images of the sun. Photos by Charlene Sharpe

Students, each with a “passport to the past” to take notes in, were tasked with observing the practices from the 1800s and comparing them to the way things were done today. Agriculture science teacher Will Warren, for example, played the mandolin and guitar for the students while another volunteer showed off the extensive sound system in his new car.

“It’s what it looks like then versus now,” Barrett said.

In Furnace Town’s woodworking shop, volunteer Fred Vanderveen had technology separated into two sections. On one side, students were shown manual tools, things like a pedal powered lathe more than 100 years old, while the other featured electric powered tools.

Volunteers from NASA spoke to students about how the area’s soil had changed between the 19th century and 2016. Another volunteer talked about lumens and the differences in light.

Two stations that proved especially popular with the students were candle making — children created candles from honey — and toys of the past. The button on a string activity and an early version of dice appeared to be as entertaining for children now as they were in Furnace Town’s heyday.

“Understanding the past and how things began is important in being able to progress to the future,” Barrett said. 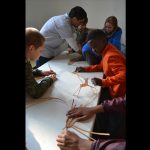 Students are pictured creating little reindeer through the weaving process.

She said when she learned the state was promoting a 10-day STEM Fest in November, she immediately thought of setting up a Worcester County event at Furnace Town. Because the historic site is full of old shops reminiscent of those that would have been active in the 1830s, she thought it was the ideal place to show students how technology had changed. The event was geared toward fourth-graders, she explained, because they were in the process of studying Maryland’s history and were also learning about animals and motion.

“It’s a good place to talk about STEM,” she said.

The festival also provided students with a chance to learn outside the classroom. Different children learn in different ways and the STEM Fest gave those who do best with a hands-on approach the chance to develop a better understanding of technology.

“Just sitting in front of a computer isn’t going to do it,” Barrett said. “There are a lot of things they’re going to remember from today that will help them in the future.”

She said this week’s festival was made possible through the help of volunteers from various aspects of the community.

“We live in a fantastic area and we have so many good partners,” she said. “Everybody’s willing to help the school system.”