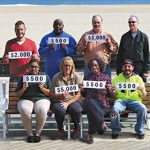 The Harrison Group held its 30th Annual “End of Season” Party and Employee Prize Drawing on Sept. 25 with $15,000 in cash and other prizes awarded. Each group employee received an entry ticket for each week they worked during the three-month summer season period for the random prize drawing. This year’s $5,000 winner was Deborah Udzielak of the Quality Inn Boardwalk. Second prize of $3,000 was won by Bob Bates of the Harrison Group and third prize of $2,000 went to Stefan Popadic, of the Harbor Watch Restaurant. Ten other employees won $500 each. They were Iona Brezestean, Marcy Rovansek, Kyle Taylor, Cody Billotte, Michelle Purnell, Serdal Toparli, Scott Sudol, Jose Flores, Danial Sabanski and Rasheeday Duffy. Pictured, back from left, are Popadic, Taylor, Bates and Hotel Operations Director Jim Luff; and, front, from left, are Duffy, Udzielak, Purnell and Billotte. Submitted Photo

BERLIN – Local listings continue to decline, but the Lower Eastern Shore’s available inventory is selling, according to the latest figures from the Coastal Association of REALTORS® (CAR). 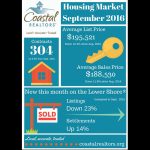 A recap of September’s key real estate data is shown. Graphic by CAR

Days on market are largely up in all three counties, with an overall 13.3-percent increase since August 2016. List and sales prices are both down, by 12.4 percent and by 11.6 percent, respectively.

“As expected, we’re seeing a busy start to the fall season,” said CAR President Don Bailey. “However, that trend can only last as long as our inventory lasts, which continues to decline every month.”

The Maryland Association of REALTORS® (MAR) reported similar trends in their statewide data, showing an overall 6.3-percent rise in home sales in September, as well as a 1.5-percent increase in pending sales and a 15-percent decrease in inventory.

“We are hoping the trend of robust sales continues throughout the fourth quarter of 2016,” said MAR President Shelly Murray. “Based on the number of pending units, we expect that October will also report strong sales. We anticipate a vibrant, autumn residential market.”

CAR’s monthly local housing statistics are pulled from the association’s Multiple Listing Service, which represents the activity of over 1,000 local REALTORS® in Somerset, Wicomico and Worcester counties.

OCEAN CITY — The Big Easy on 60 and the Greater Ocean City Chamber of Commerce are hosting a Ribbon Cutting Ceremony on Friday, Oct. 21 at 4:30 p.m.

The Big Easy on 60 is one of the newest restaurants in Ocean City focusing on New Orleans style food with a southern flair and some Eastern Shore traditions. The Hall family has been a mainstay in the Ocean City area for decades. Mark Hall decided it was time for a change for the property and the idea became a reality this summer after many months of hard work.

Members of the community who are interested in learning more about The Big Easy on 60 are invited to attend the Oct. 21 ribbon cutting celebration. 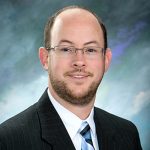 Thornton will be working from the bank’s administrative offices on Northwood Drive in Salisbury. He comes to the bank with 15 years pf experience, including six years in the commercial sector.

Thornton is a graduate of the University of Delaware with a Degree in Finance.

SALISBURY — Becker Morgan Group is honored to be the only Delmarva firm recognized by Engineering News-Record (ENR) as a 2016 MidAtlantic Top Design Firm, ranking 53rd in the region and fifth in Delaware, among many national and international design firms. 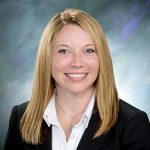 Hovatter comes to the bank with 15 years of experience in commercial lending and retail banking. She will be working from the Administrative Building on Northwood Drive in Salisbury.

REHOBOTH BEACH, Del. — Chad McMaster, a server and the assistant manager at Lupo Italian Kitchen in Rehoboth Beach, recently earned a trip to Italy by being the top seller of Conti di San Bonifacio wines during SoDel Concepts’ company-wide contest this summer. McMaster sold a total of six cases of the Tuscan wine.

“Chad is an enthusiastic and talented member of the team, and he has a bright future with SoDel Concepts,” said Scott Kammerer, president of SoDel Concepts, which also owns Plate Catering, the food truck Big Thunder Roadside Kitchen and hospitality management and consulting divisions.

The contest was part of SoDel Concepts’ employee development program. “Education is an important part of our culture,” Kammerer explained. “For instance, our servers are taught how to talk about wine, suggest pairings and properly serve it. We also want our team to learn all facets of the industry, which includes visiting farms and wineries.”

McMaster will travel to the Conti di San Bonifacio Wine Resort in Tuscany as part of his prize. Count Manfredo di San Bonifacio presented the award to McMaster during the Women & Wine event at Lupo on Sept. 22, which featured his wines and benefitted the Alzheimer’s Association Delaware Valley Chapter.

SALISBURY — Peninsula Regional Medical Center (PRMC) announced it has earned The Joint Commission’s Gold Seal of Approval® for Hospital Accreditation by demonstrating continuous compliance with its performance standards. The Gold Seal of Approval® is a symbol of quality that reflects an organization’s commitment to providing safe and effective patient care.

PRMC was also recognized in 2015 by The Joint Commission with disease-specific certifications in AMI (treatment of heart attack), Advanced Primary Stroke, Spine Surgery and Hip and Knee Replacement Surgeries.