SALISBURY – Peninsula Regional Medical Center employees came to work Monday with toys in hand in an effort to fill Brooke’s Toy Closet for its third year.

The “Bring a Toy to Work Day” honored Brooke Mulford, an 11-year-old Delmarva native who has battled neuroblastoma since 2009.

Mulford began the closet in 2014 with the help of her classmates at Salisbury Christian School. The donations have since gone to children in the hospital’s emergency room and pediatrics unit.

Mulford, who now resides in New Jersey for more accessible treatment at the Children’s Hospital of Philadelphia, was in attendance with her mother Amy for the day’s collection.

Among the employees who came to donate stuffed animals and dolls was Anne DeMarco, a member of the Peninsula Regional Medical Center Foundation Board of Directors.

DeMarco has spent recent years attending to the toy closet, spending time and money to ensure it was stocked each week.

This year, however, will be the first year the hospital has hosted a toy drive to fill the closet.

“The generosity of this hospital says something about PRMC,” DeMarco said. “It really brought the hospital together.”

The hospital provided two towering bins for the toy donations.

By noon, however, both bins were full, and the toys kept coming.

“It is amazing to see a great turnout,” Mulford’s mom said. “I feel like it keeps growing and growing.”

When Mulford sought treatment in Philadelphia, she would receive toys and entertainment from various doctors throughout the hospital, according to her mother.

“There is a big difference from a children’s hospital to a regular hospital,” she said. “We just thought it would be great to bring that idea to our local hospital here on Delmarva.”

In addition to the closet, Mulford said they provided a movable cart with a TV and DVDs for children to watch while waiting.

“Brooke was only four when we first came here,” Mulford said. “We were in the emergency room for nine hours while they ran tests, and there were no smart phones or iPads to keep a kid entertained. Now they have something to watch.” 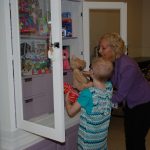 Mulford is given a hand loading her toy closet by PRMC Foundation President Denise Billing.

Mulford was diagnosed with stage IV neuroblastoma in January of 2009, after waking up with a limp on Christmas Eve.

After undergoing several treatment methods, Mulford achieved remission, but relapsed in December of 2012.

Mulford’s mother said the closet is a great way to help other children on Delmarva that have had similar experiences in the hospital.

“People contact us all the time on Facebook telling us about how the toy closet helped them or their kids,” Mulford said. “It is just nice to see this help people.”

The toy closet is restocked frequently, according to DeMarco, but said the toy drive could now support the closet for months.

“I expected the employees to bring one toy, and here they are bringing 20,” she said.

With its success, DeMarco said the hospital will most likely try to make the toy drive an annual, or even bi-annual, event.

“Everybody was just so excited about it,” DeMarco said.

Mulford, who was able to see her former doctors at the event, said she enjoyed seeing the closet’s new toys.

In addition to the toy closet, Mulford has her own foundation, which provides children with cancer on Delmarva with financial support.

For more information on the foundation, visit brookemulford.org.

SNOW HILL – Two weeks into the virtual launch of the school year, parents are already sharing internet frustrations with elected officials.While the school system has provided mobile hotspots to those who need them, internet speed and rural connectivity issues continue to plague local students.“If you’re in one of the municipalities you have everything available… Read more »

BERLIN – Mayor Gee Williams stands by last week’s decision to cancel the Berlin Christmas Parade while at least one of his challengers has plans to reverse that decision if elected.In an online candidate town hall session hosted by The Dispatch Tuesday, mayoral candidates shared their reactions to last Friday’s news that the annual Christmas… Read more »