OCEAN CITY – One woman completed a cross-country run Saturday with a final stop in Ocean City.

Jan Walker of Knoxville, Tenn. began her journey March 1 and has since taken a southern route from Oceanside, Calif., to raise awareness and money for the Sept. 11 National Memorial Trails, approximately 1,300 miles of pathway that connects each of three memorials in Pennsylvania, New York and Washington, D.C.

Although the cross-country run, labeled “Rise Up For The Fallen: A 9/11 National Memorials Run Across America,” officially ended at the Pentagon memorial, Walker said she didn’t want to stop until she reached the ocean.

After more than 3,100 miles, 196 days of running and 25 days of illness, Walker arrived at the Atlantic Ocean. 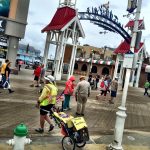 Walker is pictured with her gear at N. Division Street on Saturday. Submitted Photo

Although she does not know how much money she has raised for the organization as of yet, Walker said she will soon get preliminary numbers. However, the fundraiser will not end until the last day in October.

Walker started saving for the run three years ago and did not receive monetary support from sponsors or the fundraiser’s benefactor.

The trail project is currently 70 percent complete, but Walker said the organization has yet to create a continuous path for hikers, bikers, walkers and runners.

“I needed a charity to run for,” Walker said. “So I made a list of my criteria and did some research.”

After failed attempts to find a nationally recognized charity that placed an emphasis on awareness, Walker almost gave up.

“They all basically said, ‘That’s great. Just give us the money when you are done,’” Walker said. “It was very disheartening.”

But with a stroke of luck, Walker found the organization through Facebook.

“I looked at what they did, and they weren’t very well known,” Walker said. “But when I contacted them, they said, ‘Oh sure, we would love to have you. How can we help?’”

Walker originally planned to start the cross-country run at Pacific Beach, Calif., and to end the run at Atlantic Beach, N.C.

But when she partnered with the organization, she decided to end her route at a place that was significant for them: the Pentagon memorial.

With a charity she believed in, Walker said she was ready to take on the challenge. After a lifestyle change in 2011, Walker got involved in short races and acquainted herself with many long distance runners, some of whom had already run across the country.

A seed was then planted, but it wasn’t until this year that Walker would set out on her own.

“This was the year that I was going to put a bunch of personal stuff on hold and take the opportunity,” Walker said.

Completing the seven-month journey meant Walker had to run for 12 hours a day, equating to a 20-25-mile daily running distance.

She packed light for the run, but decided to carry a vial of water and sand from the Pacific Ocean.

When she reached Ocean City Saturday, Walker said she dumped the contents of the vial into the Atlantic and refilled it again for a personal keepsake.

No amount of training could prepare her for the pain and exhaustion she would face, but Walker said doubts vanished when she crossed the Mississippi River.

“I had doubts of finishing, but when I crossed the river it validated everything for me,” she said.

Walker would consider working with the charity again in the future, and said the group of volunteers deserves the recognition.

“Most of the money they get is from other trail organizations and grants, and their budget is small, but they focus on raising awareness first,” Walker said. “They didn’t have a hand out.”

For more information on Walker’s awareness run, visit riseupforthefallen.blogspot.com, or visit the Rise Up For The Fallen Facebook page.