“I look forward to this every year,” Deputy Fire Marshal Ryan Whittington said. “It is fun to do.”

In the day’s events, firefighters spoke with children about the dangers of matches and lighters and the signs of fire within the house. Within these talks, fire officials stressed the importance of smoke detectors. 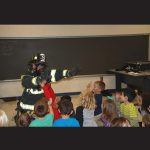 Firefighter Jordan Braniff showed the kindergarten classes at OCES the sounds of the smoke detectors and the outfits for the firefighters who respond to fire emergencies.

Students at the school were among the 700 children in the county to receive instruction and education from fire officials this year, according to Whittington.

After speaking with the students, firefighters brought the kids outside to a live fire demonstration.  Children were placed in a mobile home as simulated smoke filled the room. The kids were then taught to check doors and escape through a window.

Some of the children had many questions to ask and some even thanked the teacher for bringing the firefighters there. 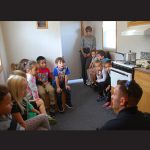 “This is the best field trip ever,” one child in Christine Lieb’s kindergarten class said. “I love it when we get to visit the firefighters.”

Students also had the opportunity to explore a fire truck and touch the many tools a firefighter uses on a daily basis.

The curriculum that these students learn from are set based on their ages, and fire officials have worked closely with the Board of Education over the past several years to ensure that all students learned the importance of fire safety in school.

Whittington added that the education these children received in school would eventually go home to the parents. 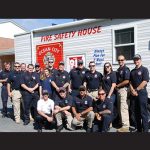 Throughout the demonstrations, firefighters urged the students to let them know if they did not have a smoke alarm in their homes. The plea stemmed from efforts to reduce preventative fire-related deaths.

Fire Prevention Week occurs one week each year in October. This year’s prevention week began Monday and will continue through tomorrow at the school.

Students also participated in other fire prevention activities throughout the week, according to Whittington. Among these activities were poster drawings and essays to enforce fire safety techniques.

Fire Prevention Week is the longest running public health and safety observance, according to the NFPA.  The annual event began in 1922, to commemorate the Chicago Fire of 1871.