An anonymous source provided local media outlets with details of an April 29 drug charge against Hall. According to online case search information, Hall was in fact arrested in Charleston County, S.C. and charged with “Drugs/manuf., poss. of other sub. in Sch. I, II, III or flunitrazepam or analogue w.i.t.d.-1st offense.”

When asked for a comment for a story published online Monday, Hall said police had seen one of her deceased husband’s medications in her bag during a traffic stop for speeding in the Charleston area.

“I went to South Carolina trying to get away. I had a bag with some prescription medications in it and one had Bill’s name on it,” she said.

Hall said that as a result of the charge she paid a $350 fine.

“They wrote a ticket. I paid a $350 fine,” she said. “I didn’t have to go back to South Carolina. I thought this matter was over.”

According to the City of Charleston Municipal Court docket, however, Hall has a criminal bench trial scheduled for Oct. 19 for possession of marijuana.

In an interview Thursday, Hall said she did not have a trial date.

“I don’t have to go back to court,” she said. “I did not have the weed. The person I was with had the weed, wouldn’t own it, and dumped it on me.”

Hall denied that she had the $5,000 bond listed in the online case search. She claims that the night she was arrested, she had prescription pills with her, some of which were her husband’s, while her companion, who she would not name, had marijuana.

“I pled guilty to the pills,” she said. “I didn’t have a $5,000 bond. I was released on personal recognizance. They dropped the charges other than the pills.”

Hall said the incident occurred in the wake of her husband’s death, which she called the worst time of her life. She said she was with an acquaintance she didn’t know well.

“They had pot on them and I didn’t know it,” she said.

When asked why she referred only to the flunitrazepam when first interviewed, Hall said it was because she didn’t “think the weed part was coming out.”

According to an investigation report from the Charleston Police Department, Hall and another woman were charged with marijuana possession at the Marriot Hotel in Charleston after the odor of marijuana prompted staff to call police.

According to the report, Hall tried to leave the scene via elevator when she saw police but was easily detained. She later “freely admitted that she had marijuana in her possession.” Police searched her purse and found four “marijuana joints” inside two empty cigarette packs. 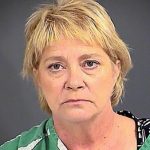 Though the police report makes no mention of prescription pills, in Thursday’s interview Hall continued to claim that the night she was arrested, she had prescription pills with her, some of which were her deceased husband’s, while her companion had the marijuana.

Approximately 40 grams of marijuana were recovered from the room and inside a refrigerator as well as paraphernalia.

Hall believes the arrest four months ago is being brought up now because the town’s election is next week. Hall is running for mayor against incumbent Gee Williams.

“It’s very unfortunate that we have lowered ourselves to this level of campaigning,” she said. “I have purposely been taking the high road.”

Hall was first elected to the town council in 2008 when she ran against Thom Gulyas and Jason Walter. She was reelected in 2012 and since then has made it known she planned to run for mayor this year. Hall, who is involved with the Maryland Municipal League, the Rural Maryland Council and the Eastern Shore Association of Municipalities, says her focus is on making sure Berlin keeps its small town charm.

Hall will be giving up her council seat to challenge Mayor Gee Williams, who is looking to secure his third term in office after first being elected in 2008 and unopposed in 2012 despite a robust write-in effort for former Councilwoman Ellen Lang.

With Hall not running for her council seat, a newcomer is assured to join the council with candidates Jack Orris and Zackery Tyndall squaring off on Tuesday, Oct. 4 for the District 2 council seat.

District 3 Councilman Elroy Brittingham is unopposed for his seat.

The deadline for absentee voting applications to be submitted in person before the election is Sept. 30 at 5 p.m.

The polling place for Districts 1 and 2 is Buckingham Presbyterian Church on South Main Street, while Districts 3 and 4 vote at the Multipurpose Building on Flower Street. Polling places will be open from 7 a.m.-7 p.m. on Oct. 4.