BERLIN – “Where service and quality meat.”

That’s the motto at the Berlin Butcher Shop. The shop, set to open on William Street next week, will be focused on providing customers with old-fashioned service and high quality meat.

“I want folks to feel comfortable calling and talking to their butcher,” owner Lisa Hall said. 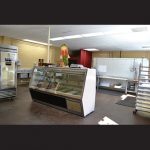 The interior of the new Berlin business is basic and reflects “the old school style” of the operation.

Hall, a longtime Berlin resident and town council member since 2008, has been thinking about opening a butcher shop since the idea came to her on a 2010 cross country trip. She says as Americans become more health conscious and interested in what they’re eating, they’ll need alternatives to the major grocery stores.

“I wanted to go into business and looked for something that wasn’t available,” Hall said. “I realized there was a need.”

She says that’s particularly true now that the meat departments at grocery stores cut very little meat. Most of what major stores sell comes pre-packaged. That’s part of what interested Matt DiPietro, Hall’s butcher, to become part of the Berlin Butcher Shop. He was previously the meat manager at an area grocery store.

“I wanted to get back to the old school style where you can cut everything and do the custom cuts,” he said.

DiPietro grew up in his father’s New York City butcher shop and is eager to get back to his roots.

“It’s something I started when I was 12,” he said. “My dad taught me to cut meat in his own store. This was his dream for me.”

According to Hall, her shop will offer customers beef, poultry and pork as well as specialty items. She’s working with Maryland farms that will be providing the shop with organic and grass-fed meat. The shop will also sell gluten-free soft drinks and organic eggs. 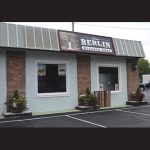 The Berlin Butcher Shop is located in the former home of Rainbow Florist on William Street. Photos by Charlene Sharpe

Hall says that while other shops in Berlin sell some similar items, her’s is the only full-fledged butcher shop. She’s looking forward to working with other downtown merchants. She’ll also be providing some restaurants with meat.

“I’d like to cross promote with other restaurants and businesses in Berlin,” she said.

She’s been working since June on renovating the building at 101 William St. Once a gas station, in recent years the space was used as a flower shop. Hall replaced the ceiling, stripped the floor and painted the walls before installing the butcher shop’s utilitarian equipment.

She believes the location will prove ideal for a butcher shop.

“I liked it because it was off Main Street so street closures wouldn’t affect customers getting to me,” she said. “I also have parking.”

Hall is eager to open the shop up next week following final inspections.

“I am very excited about getting so close to finally opening,” Hall said. “Matt and I look forward to providing our customers with a quality product.”

For more information, visit the Berlin Butcher Shop on Facebook.