OCEAN CITY — With practically the entire Ocean City sportfishing fleet reporting double-digit releases, including one local boat scoring a rare “Fantasy Slam,” the white marlin bite off the coast has been off the chart this week, confirming once again the resort’s unofficial “White Marlin Capital of the World” title is well justified.

In the weeks since, it has been a common scene around the resort’s marinas to see sportfishing boats coming into port with multiple white marlin release flags flying high, turning outriggers into high-dollar clotheslines, but the bite reached a crescendo last week and into the early part of this week with most of the boats returning with double-digit releases.

On Tuesday, perhaps the biggest day of the white marlin madness, several boats came in with double-digit releases including but not limited to the Pumpin Hard (27), the Espadon (21), the Makara (20), the Reel Chaos (18), the Wrecker (18) and the Billfisher (14). Those figures reflect the number of white marlin caught and released and the number of fish actually seen out in the canyons is considerably higher.

While the resort’s sportfishing fleet was piling up white marlin releases all week, one crew in particular had a day they will never forget. Captain Kyle Peet and the crew on the No Quarter went out Tuesday for an overnight trip to the Norfolk Canyon and returned with a rare “Fantasy Slam” including 23 white marlin releases, one blue marlin release, a sailfish, two spearfish and one big swordfish, along with a big mako thrown in for good measure. The No Quarter’s rare fantasy slam created quite a stir around the resort’s marinas and evidently up and down the coast.

“It’s called a Fantasy Slam and it’s never been done before in Ocean City,” he said. “I talked to guys from Marlin Magazine this morning [Thursday] and they didn’t think it had ever been done on the east coast.”

Peet said the No Quarter went out on Tuesday for an overnight trip and were covered up practically all day. Perhaps the highlight was an epic battle with a big swordfish late Tuesday night and into Wednesday morning that ended up with a pretty remarkable accidental catch.

“We hooked the sword around 11:30 on Tuesday night and fought it until around 4:30 a.m.,” he said. “We got it to the boat and gaffed it and were celebrating when somebody yelled ‘shark’ and then a big mako came up and took a bite out of the tail section. That mako swam around the boat for about 20 minutes before we were able to get a flying gaff in it and bring it to the boat.”

Not lost in the dramatic turn of events was the 23 white marlin released by the No Quarter during the trip. However, similar totals were reported throughout the week in what can only be considered an epic white marlin bite.

Captain Jeremy Blunt on the Wrecker, which released 13 on Tuesday alone, said there are several factors at work during the current stretch.

“There are a lot of reasons for it,” he said. “It’s fall, it’s September, there is a full moon and the water is warm and clear. These fish are spread out from New Jersey to North Carolina.”

Fishing is a fickle sport and there is no telling how long the current hot streak will last, but Blunt said the white marlin bite is hot throughout the mid-Atlantic canyons and there is no reason to believe it shouldn’t last.

“It should be good through the weekend at least,” he said. “The fish are migrating and progressing south, and hopefully they’re trying to get fat and happy. The Cape May guys are reporting 20 to 25 releases each day, so they are still north and likely heading this way.” 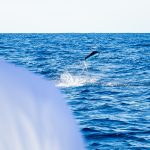 An angler on the Wrecker works to bring in a white marlin during Tuesday’s trip offshore. Photo by Nick Denny

Peet agreed with Blunt’s assessment of the current white marlin bite of the mid-Atlantic coast.

“I think there are a lot of factors at work here,” he said. “The moon phase is just right, the water is clear and there is a ton of bait in the water. I think with the hot summer we had, the water is really warm and we’re seeing a ton of fish. I think it should last for a few days and I hope so because I have charters booked for the next 12 days.”

The red hot white marlin bite comes at a time when the Ocean City Marlin Club and the Cape May Marlin and Tuna Club area preparing to do battle in the 38th Challenge Cup. Blunt said with the reports of double-digit releases coming in all week, the tournament could be setting up to be something special.

“We have the Challenge Cup this week with the Ocean City guys against the New Jersey guys and all of the big hitters are lining up,” he said. “It should be a very interesting weekend.”

Captain Franky Pettolina on the Last Call said Ocean City’s “White Marlin Capital of the World” nickname is often called into question, but the white marlin action off the resort’s coast this week perhaps settles the issue.

“I’ve fished all over the world and this is as good as it gets anywhere,” he said. “It’s been nothing short of amazing. Ocean City is called the ‘White Marlin Capital of the World’ for a reason, and it’s not always evident why, but when you see something like this going on, I think it certainly validates that title.”

Over on the Reel Chaos, mate Rich Hastings said he also hoped the epic run would continue.

“These are the days that you wish for if you are a marlin fisherman,” he said. “You have to take full advantage of it when you can. There’s been lots of action with cutters balling up the bait. It’s really a fisherman’s dream. That’s why we all can’t wait for September.”