The name was revealed to an audience at Fish Tales on Sept. 1.

In 2012, Matthew Jude Cheswick was attempting to cross Coastal Highway when Diogo Miller Facchini, 30, of Lorton, Va., struck him and drove away. Facchini was intoxicated and was larger charged in the incident.

Since then, Cheswick’s parents have championed the Walk Smart campaign.

Cheswick’s mother, Cecelia Roe, says she was pleased that the public was aware of what happened, and were supportive of this cause.

“I think anytime we can bring awareness to pedestrian safety, it’s a wonderful thing, especially considering what happened to my son,” Roe says. “My son’s tragedy was the largest tragedy of 2012 that led to this campaign. So as I said, that out of tragedy comes good.” 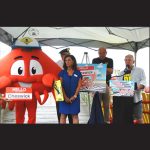 Christopher Cheswick, right, speaks during last week’s press conference where it was revealed the Walk Smart crab will be named after his son who died in 2012 crossing Coastal Highway.

In the past three years, the task force has focused on engineering, education and enforcement to improve pedestrian and motor vehicle safety.

“This program, the crab, has won National Highway Traffic Safety (Administration) and the
Governor’s Highway Safety Association award,” Kirstein says. “But we still have a lot to do to get toward zero deaths, the nationwide traffic safety initiative.”

SHA is now preparing to add dune style fencing along the median after making changes to pedestrian crossings and signage in recent years.

Now, with the help of Cheswick’s new mascot name, the city hopes to expand outreach to an ever-changing population.

“I think our campaign has gone a long way and [is] at least making people aware that they should use a crosswalk and not just cross mid-block where people are not expecting it,” Drewer says. “Every week during the summer months, we have to reeducate a different audience.”

Since revealing the Walk Smart! Campaign, the task force says nearly 70 percent of those surveyed were familiar with the crab and its message.

Since his death, Cheswick’s mother and father, Christopher Cheswick, have set up memorial funds, awareness campaigns and scholarships in his name.