OCEAN CITY – A new resort restaurant is bringing the tastes of New Orleans to Ocean City.

The Big Easy on 60, located on Coastal Highway at 60th Street, aims to bring a Cajun flavor to a town overrun with crab houses and seafood shacks.

“Our food is different and unique,” said Lewis Sherman, the restaurant’s general manager. “At the moment it’s different than anything you’ll see in the area.”

The Big Easy on 60 opened last month in the large building that housed Hall’s Restaurant for decades. Mark Hall, whose parents operated that eatery, is the proprietor of the new restaurant, which serves breakfast, lunch and dinner.

“This building is built around the house he grew up in,” Sherman said. “The Hall family has been on the property since the 1950s.”

He says Hall came up with the idea of a New Orleans-style restaurant on a whim.

“One day Mark said ‘you know, it looks like a plantation home,’” Sherman said. “That’s how the idea came about.”

“I’ve been in the business all my life,” Sherman said. “We had a lot of the same philosophies.” 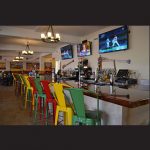 An eight-month renovation of the property was completed earlier this summer.

“I was tired of chicken wings,” Sherman said, adding that the duck was seasoned with the restaurant’s special Big Easy sauce. “It’s king of sweet and spicy at the same time.”

Entrees include jambalaya, etouffee and blackened catfish among a number of other New Orleans style foods. Sherman is particularly proud of the muffaletta, which features salami, ham, mortadella, provolone, mozzarella and an olive salad.

“We’ve tried to be authentic with what we’re serving,” Sherman said. “We go really traditional with the food.”

The menu does, however, include items like prime rib in case diners aren’t ready to try something different. Nevertheless, Sherman hopes they’re willing to expand their palate. 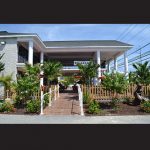 “People shouldn’t be scared when they see ‘New Orleans,’” he said. “The cool thing about New Orleans food is people think it’s overly spicy but it’s really not. It just has a lot of flavor to it.”

The restaurant’s drink menu also pays homage to the Big Easy with selections such as the “Hurricane,” Big Easy Mary” and “Bayou Orange Crush.”

Like the creole crab dip, the orange crush is one of the restaurant’s attempts to blend Ocean City favorites with the flavor of New Orleans. The efforts appear to be paying off. Sherman says customers are giving the place positive reviews.

Sherman said the restaurant’s happy hour, which runs from 2-6 p.m. and includes half price drinks and appetizers, has been a big hit. Live music — jazz, of course — is also a draw on Thursday, Friday and Saturday nights.

For more information, look up The Big Easy on 60 on Facebook.