SNOW HILL – No one doubted that the large contract Hardwire LLC acquired with the NYPD would benefit the Pocomoke-based company. What many may not have realized is that other Worcester County businesses are beginning to profit from Hardwire’s success.

As Hardwire builds bulletproof doors for the NYPD, Snow Hill Auto Body is painting them.

According to George Tunis, chairman and CEO of Hardwire, the company has a large contract with the NYPD to up-armor police cars, outfitting them with bulletproof doors.

“This is the first mass application of bulletproof patrol car doors in the United States,” Tunis said. “We’re doing thousands of doors.”

After being outfitted with armor, all of those doors are being sent to Snow Hill Auto Body to be painted. Tunis said he wanted to use a local company to do the work.

“We love to keep business here in Worcester County,” he said. “There’s a lot of great talent here.”

He says that while the Eastern Shore is a bit remote, the location doesn’t hurt Hardwire because it is part of a specialized field.

“Our company has a little further reach because we do some exotic stuff,” Tunis said. “That reach means we’re bringing in work from New York and other states that otherwise wouldn’t be here.”

Snow Hill Auto Body and its 18-member staff are now painting 100 doors a day. While the work itself was nothing new for the crew there, the volume was.

“You’re doing so many at one time,” Fiscus said, adding that it was more the process that had taken some getting used to than the painting. 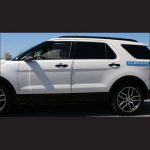 He said Hardwire helped prepare the facility for the project by designing racks to hold the door panels. As Hardwire continues to outfit doors with the new armor, Snow Hill Auto Body will continue to paint them. Fiscus says he expects to hire more employees as the work continues.

“This is just the beginning,” he said. “As their volume increases ours will. It’s great to be partnered with them. They’re an exceptional organization.”

“They’re doing a magnificent job,” he said. “As long as they can keep up with the demand, I want to keep every stitch of work there.”

“This is what happens when an investment is made in economic development,” Mears said.

She said her department had spent time, resources and expertise working with Hardwire in recent years.

“We have found an incredible community partner in the process,” she said. “Because of Hardwire’s success and their focus on their community, we are now seeing an infusion of capital being invested in other businesses here. Because of this, we all rise.”

Hardwire, which was founded by Tunis in 2000, began focusing on armor protection for vehicles after Sept. 11, 2001. In recent years, as “active shooter” incidents in the United States have increased, key products have included bulletproof shields, clipboards and whiteboards. Following the Dallas sniper attack that killed several law enforcement officers, interest in Hardwire’s ballistic protection for police cars has grown.

Aside from the boost in business that’s given Snow Hill Auto Body, Fiscus says it’s an effort his crew supports.

“The guys are excited about being able to help protect police officers,” he said.