Instead, she was on an Ocean City deck, enjoying the ocean breeze and chatting with Gov. Larry Hogan.

“I can’t believe you were supposed to get chemo today and used me as an excuse,” Hogan joked.

Friz — whose chemotherapy was rescheduled for Monday — and her family were among several enjoying a respite at the Believe in Tomorrow House by the Sea. The house, part of a network of similar places operated by the Believe in Tomorrow Children’s Foundation, provides families with sick children with a place to relax and renew their spirits.

Hogan, who was diagnosed with non-Hodgkins lymphoma shortly after being elected, made a point to visit the families staying at the house on 66th Street during last week’s Maryland Association of Counties conference in Ocean City.

“Isn’t this a great program?” Hogan said as he chatted with families and toured the house. “There aren’t even words to describe how awesome it is.”

Hogan, who was accompanied by his wife, explained that he actually first met Friz, a Woodbine resident, at the hospital when they were both being treated for cancer. He praised the positive attitude she’d shown him then.

“We put on smiles and then went our separate ways and threw up,” Friz said. 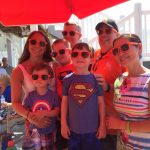 Hogan is pictured with the Biggs family.

She told Hogan about the array of activities she and her family had had the opportunity to try during their stay at the Believe in Tomorrow house.   She said she and her sister had taken surfing lessons, visited the Seacrets radio station and eaten crabs.

“We definitely have the Maryland spirit when it comes to picking crabs,” she said. “We got every last piece of meat.”

Jennifer Biggs, whose son Parker was diagnosed with leukemia when he was 18 months old, said she and her family had been pleasantly surprised by all of the opportunities they’d been provided with during their stay at the house.

“We just assumed it was a place to stay,” she said. “We had no idea they had all these activities planned for us. They had a chance to do things they’d never be able to do otherwise.”

Hogan took his time at the Believe in Tomorrow House by the Sea, chatting with each of the families. He traded chemotherapy stories with the children and offered words of encouragement to those still undergoing treatment.

He said it was particularly nice to see Friz and her family enjoying a break from the hospital.

“She’s an incredibly bright young lady and so tough,” he said. “She’s the most positive girl. It’s nice to see her and her family again.”

The Believe in Tomorrow House by the Sea opened in 2000 and features five units for families. The program also offers respite stays at a house in Fenwick Island as well as a bayside location in Ocean City. A new 65th Street location is set to be renovated in the near future.