OCEAN CITY — Baltimore natives Edward and Marianne O’Keefe stood on the shoreline just steps from the water’s edge in front of the Castle in the Sand Hotel on Wednesday morning with tears in their eyes, and their cell phones in hand, poised to capture a moment they’ve been waiting years to experience: their 18-year-old daughter Mallory surfing.

Mallory has Down Syndrome, Autism and is prone to have occasional seizures, and, according to her parents, she’s had a slew of other health issues including two hip surgeries and dislocated knees in recent years.

Mallory and more than 200 other kids took part in the 8th Annual Surfers Healing event in Ocean City this week, and for these kids and their families, it’s more than just a day at the beach, it can be a joyous life changing moment, and a memory that these families will cherish forever.

For the O’Keefes, that moment they captured of their daughter sitting on a longboard with a professional surfer paddling into a slow moving glassy wave and riding it to the shoreline, almost didn’t happen.

“She had something that we think was a seizure this morning and she fell and bumped her head,” said Marianne, “but the paramedics and the people at Surfers Healing were so helpful in trying to make sure that she was able to do it. I just can’t even describe what it means to see her ride that wave in.” 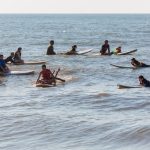 A group of surfers are pictured with special needs participants in Wednesday’s Surfers Healing event. Photo by Chris Parypa

The O’Keefes, like many families have been trying for years to be one of the families that get to be a part of the annual event. This year, Mallory was chosen as part of the lottery draw.

“I’ve never won anything in my entire life,” said Marianne O’Keefe with tears of joy streaming down her face behind her dark sunglasses. “This is the first thing I’ve ever won. I’m just so happy.”

As you stand on the shoreline with hundreds of other families watching their children being pulled up, one after another, to a standing position on a surfboard and riding a wave, each moment yields thousands of infectious smiles, countless happy tears and thunderous applause and cheers.

For families who have children with Autism or other disabilities, every day is hard in some way, but this one is wonderful.

“That’s definitely the feeling,” said Ed O’Keefe. “Every day is tough, and that makes this one that much more special. It can be isolating sometimes for her and for us, because it’s kind of a long-term care situation, but it’s not care for an elderly person, it’s for a child and that care lasts for decades. So, a day like this means the world to us.”

Surfers Healing is a national organization featuring teams of surfers traveling to coastal communities all over the country to provide a day of surfing for kids with autism and other special needs. Surfers Healing now serves around 4,500 kids all over the country, but the mission began with a single child. Israel and Danielle Paskowitz founded Surfers Healing for their son Isaiah, who has autism. When Isaiah struggled with frequent meltdowns and sensory overload, riding the waves with his father calmed him like nothing else could. The Paskowitz family began inviting other families with similar challenges and the idea caught on. Surfers Healing is now a nationwide, grassroots non-profit organization, and while it serves thousands, it thinks only in terms of ones: One child, one family, one day at the beach.

Kelly Loeser is the co-director and the local source of the Surfer’s Healing chapter in Ocean City. She says this event and the power of the mission never ceases to amaze her.

“It’s a day when these kids on the spectrum know their parents are proud of them, and they finally get to achieve something that is outside of therapy,” said Loeser. “Their siblings get trophies and achieve things all year long, and today, they get to feel proud of themselves while overcoming some of their fears, too.”

This year, the 200 spots for Surfers Healing filled up in 15 minutes. 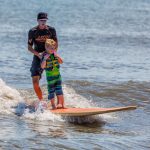 Carson Green, 6, of Berlin, was one of the lucky individuals who got to go surfing this week. Photo by Chris Parypa

Louser says the chapter is hoping to double the number of participants in future years by expanding the event from one day to two. The availability of the surfers, many of which are from California, Australia, Hawaii, and other places around the world, whom travel to other Surfers Healing chapters for events may be the only tripping point in the expansion of the Ocean City event.

A little bit further down the beach, Wilmington, Del. native Katie Urbanski is watching her 11-year-old son Johnny sit Indian-style on the end of a longboard as his surfing instructor paddles out past the shore break.

“He was so excited to get out there, he jumped on the board before the instructor was even ready,” she laughed.

Johnny was diagnosed with autism at age three, but the water has always been his thing, according to his mother.

“He loves the water so much, we redid our bathroom so our bathtub will fit him so he can lie down completely flat and enjoy a full body tub,” said Urbanski. “When he’s having a tough day, I will drive to the beach and he will jump straight in the waves.”

Urbanski learned about Surfers Healing on the Internet and tried for a few years to get in after deciding that her son was ready for the experience.

“This is the marriage of fun, sensory profile that will help his vestibular system, and plus, he gets a one on one with someone to experience it with him and teach him, so I can only imagine how good this is for him. I think it’s empowering for him,” she said.

On most days Johnny has a hard time communicating with the world. He has an expressive speech delay, and at 11, he is still learning to talk. School is a year-round challenge as he goes from full inclusion in his public school to getting pulled out of some classes for special training and speech therapy.

Yet, when he’s in the water, he doesn’t have to worry about words or rules or numbers. It’s all feeling and doing.

“He’s my gentle giant,” said Urbanski as she scrolled through pictures on her camera with Johnny’s sister. “He wears his heart on his sleeve. He may not be able to voice it, but you know how he’s feeling.”

And as Johnny’s became wide-eyed with excitement and his smile grew to full ear-to-ear capacity as he caught his last wave of the day, it was obvious to everyone clapping and cheering along the shoreline as his mother wiped away more of those happy tears what he was feeling.

In that moment, Johnny was at one with the ocean, and his smile perfectly articulated what true happiness is and what conquering all your wildest dreams looks like.

Ask anyone who has ever experienced Surfer’s Healing, whether as a participant, volunteer or a spectator, and they are likely to tell you that there is something truly magical in the moments that it helps create.

To view an album of photos from Wednesday’s event, click over to www.facebook.com/thedispatchoc