OCEAN CITY — There was a time in Ocean City, albeit prior to 1976, when kids didn’t have a dedicated place to skateboard. Local promoter Brad Hoffman remembers that time well as he was one of those “punk” kids who were skating anywhere they could in the resort, grinding on the concrete banks at Trimper’s Amusements and dropping in on any pool that might be drained just like the famous Z-boys on the other side of the country in California.

As a result, the Mayor and Council outlawed skateboarding in the early 70’s, but soon a grassroots effort driven largely by a local mom convinced the city to open the Ocean Bowl Skate Park in downtown Ocean City. The Ocean Bowl is now the longest continuously running municipal park in the world, and this week, it will celebrate 40 years as being the resort’s headquarters for skateboarding enthusiasts.

Hoffman will be hosting the festivities at Friday’s celebration and sat down with The Dispatch to talk about the park’s impact, his favorite memories and what its role in the town’s future may look like. 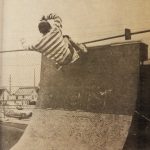 Q: For you, obviously this anniversary means a lot, but there are also many other reasons why this is a notable moment in Ocean City’s history. So, explain for people who have never gotten on a skateboard and ridden into that cool skate park why this is an important anniversary to the town.

A: I think it’s important because skateboarding and surfing is a part of, I’d say, the beat of Ocean City. It’s a part of its culture. It’s been here when we didn’t have a big town, people surfed and skateboarded. It’s always been a major part of beach culture. Because of that, it’s also a part of worldwide culture, as it’s the oldest municipal skate park in the world that never closed. So, that’s notable. It’s a monument to skateboarding.

People from all over the globe came to the Ocean Bowl, whether it was in the 70’s, or the 80’s, or the 90’s because it was something that was on their bucket lists as a skateboarder. We had pros and many demos and contests held there over the years. It is a landmark and it sits right by the Mayor and Council’s offices (on 3rd Street) near City Hall.

Q: You mention the fact that the Mayor and Council pushed forward and put in a park like this, but historically speaking, one of the other big names as being very important to the Ocean Bowl’s existence was, of course, Haystack Marlowe.

A: Oh yeah. We called Haystack “MOSS” or Mother Of Super Skaters. Of course, Josh Marlowe went on to be a pro skater and Brian and Greg and even Phil all skated, but she was the one that really made it all happen. She was the pit-bull that just wouldn’t stop. They made it illegal but they weren’t going to give us a place to go, so Haystack said, ‘I’m not going to let this happen because this is what my boys love to do.’

She sat down there, even after the park was built, and sold hot dogs, hamburgers and Coke’s to raise money and she would take us around to different contests. But, she was the one that would not let go of the Mayor and Council’s coattails until they said they would do it. In the 1970’s, to get a Mayor and Council to approve building a skate park when there were other things that were a priority like real estate development, she wouldn’t stop and she made it happen. She was the mother not of “super-skaters”, she was the mother of skateboarding in Ocean City and probably the East Coast in a lot of ways.

Q: Personally, was that skate park essentially the home base for your social life? 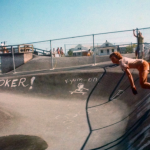 A: That’s where some of my best relationships and lifelong friends were made. That’s where I looked up to older skaters that taught me style and life lessons and how to carry myself. It’s where I began to understand the basis of marketing and events, which is now my career. I ran a lot of contests and that’s how I got into what I do today.

It basically gave me my life. My mom and dad would drop me over from Bayside Marina at 12 or 13 years old, and they knew I was safe. I’d be there long after dark and they’d come pick me up later. Ocean City didn’t seem, to me, like a place I ever wanted to leave at that point, and I’m still here today. When the skate park started to fall apart in the late 80’s, we started the “Save Your Skate Park” committee theme, and we created a whole plethora of new people who wanted to see upgrades at the park.

We shut the big bowl down and Josh (Marlowe) and I built a vert ramp in the bottom of the big bowl, which, for all intents and purposes, brought Ocean City into the vert skateboarding world. So, either building ramps, skating with my friends, running contests, seeing the park getting renovated, and being a part of when the Dew Tour came here and watching them upgrade it again so we could be proud of our park again has been great. Now, I get to take my daughter there today and hand my experiences down to a new generation. That’s what it’s all about.

Q: Do you think the popularity and success of the Dew Tour’s run in Ocean City renewed interest and focus in the Ocean Bowl?

A: Definitely. They couldn’t let some of the best skaters in the world come to town and have a park where tiles were falling out of the pool and the ramp needed to be relayered and updated, so they jumped in and spent some money. At that point, I think they realized that it was still relevant and they had a big chunk of land there and started considering doing another component of the skatepark in the future. [The Council] brought it back up to the surface in some meetings and brought in some worldwide skate park designers and talked about how we could expand into those ball fields that are right next to it and take it to the next level.

The Town of Ocean City owns the Dew Tour’s pool bowl, and if you could set that up, that would be like, as they say in surfing, having Pipeline in your backyard. These new kids are the next Tony Hawk’s and Bucky Lasek’s, so to see them down there riding that park, it’s great. There’s just something about coming through those gates, it just feels like you are walking into a hallowed hall of history of skateboarding.

Q: As far as the 40th anniversary celebration this Friday, I understand you’ll be the M.C. for the event, but explain to me what will be going on to pay homage to the park’s history.

A: Kim Kinsey, the new skatepark manager, and Susan Petito, head of Rec and Parks have been really great and put a great event together. First off, it’ll be going from noon to 7 p.m., and around 1 p.m. we’ll have what’s called a “One Trick Pony” where we give out some fun prizes for a loose kind of contest, and then around 3 p.m., [Ocean City Recreation and Parks Director] Susan Petito will speak to what the skate park means to the city. After that, I’ll present some of the heritage awards for this year. There will be five inductees this year. After that, there will be a free open skate for everyone and big displays on what the Ocean Bowl has looked like over the years. There will be people that I haven’t seen in years all coming together to really celebrate what the Ocean Bowl has meant to us and watch what it is doing for the community in the current day.

(To listen to the extended audio, click over to The Dispatch Download podcast for a full description of all this year’s heritage award winners.)