OCEAN CITY — After the first three days of the 2016 White Marlin Open, a single qualifying white worth $2.4 million sat alone atop the leaderboard in the glamour division, a huge blue marlin with quite a tale of its own, pun intended, topped that division, but the story of this year’s event through mid-week was more of what hasn’t happened rather than what already has.

With 329 boats entered, the field for the 2016 White Marlin Open is the largest in recent years, so there has been no shortage of effort. After a recent low of just 262 registered boats in 2013, the number has steadily increased in recent years to 288 in 2014 and 307 last year, marking the first time in several years the total has eclipsed the 300 mark.

A total of 329 boats are participating in the 2016 event, which has a total purse of $4.4 million, but through the first three days, only angler Phil Heaseley aboard the Kallianassa home-based in Naples, Fla. had brought a qualifying white to the scale at host Harbour Island Marina.

Heasley and the “Kallianassa” crew boated the big white around 9 a.m. on Tuesday morning and were waiting at the scale at host Harbour Island Marina before it officially opened at 4 p.m. on Tuesday. Once the scale opened and the big white was measured and lifted from the cockpit, it weighed out at 76.5 pounds, more than enough to become the first qualifying white marlin.

Through Wednesday, the 76.5-pounder sat alone atop the leaderboard and was worth an estimated $2.4 million, but as is the case in many years, Heasely and the Kallianassa had to wait out a trying three more days to see if the big fish and its $2.4 million payday would hold up.

With steadily deteriorating conditions offshore, many of the 329 registered boats front-loaded their fishing schedule with at least two of their three days in the early part of the week. Participating boats can fish three of the five official fishing days from Monday to Friday and captains often wrestle with the best strategy.

With 329 boats fishing three of the five days, there is a total of 987 “boat days” for the 2016 WMO. Going into Thursday, there was just 270 boat days remaining, or about the same average number that fished on each of the first three days of the tournament.

Through the first three days, only one of the 18 white marlin brought to the scale at Harbour Island met the minimum 70-pound requirement with several others falling just short of the mark. What typically happens is until a qualifier or multiple qualifiers are on the leaderboard, any big white that meets the minimum length requirement and appears to have the girth to meet the 70-pound minimum is brought to the scale, but once the bar is set, the number of whites that fall just short starts to decline.

Through Wednesday, over 1,000 white marlin releases were reported including 500 on Monday alone.

If Heasely’s 76.5-pound white holds up, there is nothing remarkable about the size of the fish. Last year’s winner weighed in at 94 pounds and the tournament record set in 1980 was 99 pounds. In 2012, the winning white marlin weighed in at just 72 pounds and only twice in the last 10 years has the winner come in at under 80 pounds.

While the 76.5-pounder has been the big story in the signature white marlin division, perhaps the most drama through Wednesday came in the blue marlin division. Late Monday night well after the sun was down, the first qualifying billfish was brought to the scale and it created quite a stir among the thousands still milling around Harbour Island. Angler Jim Conway fishing on the Get Reel out of Ocean City caught the 9 p.m. drawbridge and arrived at the scale with a massive blue marlin lashed to the side of a small vessel. At some point, the marlin’s tail was severed.

After the requisite measurements were taken and a ruling was made on the tail issue, the big blue was hauled on the scale with a makeshift cradle of sort and topped out at 790 pounds. Through Wednesday, the 790-pound blue was the lone qualifier in the division and was worth $150,000.

The debate centered on when the tail was lost and whether “mutilation” occurred and at what point. According to IGFA rules, a fish should be disqualified if mutilation occurs prior to the fish being landed or boated. In this case, WMO officials determined the big blue lost its tail after it was officially landed, likely during the towing process to the scale.

Throughout the early part of the week, the tuna division saw its leaderboard written, erased and written again as several big tuna were brought to the scale. After the scale closed on Monday, a 71.5-pound tuna weighed by the Fish Whistle sat atop the leaderboard. On Tuesday, however, angler Mark Hutchinson and the crew on the Magic Moment hauled in a 233-pound big-eye temporarily worth $400,000. 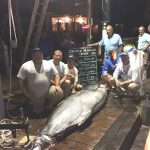 The first-place blue marlin is shown with its tail, which was severed, placed where it’s supposed to be. Photo by Fish In OC

Fame was fleeting for the “Magic Moment” and on Wednesday, angler Rich Kosztyu on the Hubris brought in a 236.5-pound big-eye tuna. The Hubris nudged the Magic Moment from the top spot by a mere three-plus pounds and stood to earn $400,000 at the close of the scale on Wednesday.

In the dolphin division, angler Thomas Bennett on the Delta Dawn led after Monday with a 34.5-pounder, but was bounced from the top spot on Tuesday by a 36-pounder caught by local angler John Gudelsky on the Reel Joy. Angler Brian Russell on the Sea Wolf matched the 36-pounder on Wednesday.

In the wahoo division, Richard Hammond on the Two Timing Connie sat atop the leaderboard after Wednesday with a 79-pounder. Brian Leader on the Second Chance was second with a 54-pounder, while Steve Figiel on the No Service was third with a 40.5-pounder. On Wednesday, the first shark made an appearance on the leaderboard with a 260-pound hammerhead weighed by angler J.D. Messler on the MJ’s out of Ocean City.