ASSATEAGUE — The circle of life was on full display this week at Assateague with an elderly stallion tragically hit by a car and euthanized last Friday followed by the birth of a new foal on Monday, the fourth of five expected in a virtual baby boom this year.

On Friday, Assateague Island National Seashore officials announced a 16-year-old stallion, known affectionately as Tunkan Hoksila, was hit by a car on the barrier island. Because the horse suffered a broken right hind leg, Tunkan was humanely euthanized. The tragic loss was tempered somewhat early this week when the mare known as Chama Wingapo surprisingly gave birth to a new foal in the developed area near the north end of the island.

Chama Wingapo was not known to be expecting. After annual pregnancy tests for many of the mares in the herd of wild horses on the island in November, three including JoJo, Carol’s Girl and Charmed were found to be pregnant. JoJo and Carol’s Girl have already birthed their foals earlier this spring and summer, while Charmed is still expecting and should birth her foal at any time now.

This week’s birth by Chama Wingapo was the second surprise foal this summer. Earlier this summer, Gokey Go Bones birthed her foal in late June. Charmed, who was found to be pregnant last fall, has not yet birthed her foal. Charmed’s foal will make five new additions to the Maryland side of the island.

Assateague Island National Seashore Science Communicator Kelly Taylor said pregnancy tests are conducted each November by collecting feces samples from the mares in the herd. When the test results were returned, three mares were known to be expecting, but Chama Wingapo was not and it could be because she was so early into her pregnancy when the tests were conducted.

“She was tested for pregnancy in November and it’s possible she was just a few weeks or a month pregnant, but the test came back negative,” she said.

With four foals already birthed on Assateague this summer, including the surprise filly on Monday, there is a virtual baby boom on the island this year. The trend in the last several years has been one or two, or even zero, in some cases. With four foals born this summer and the loss of Tunkan to a vehicle collision last Friday, the number of wild horses on the Maryland side now stands at 87, which is well within the ideal target range of 80-100. 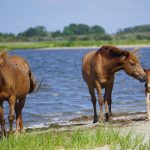 In the interest of maintaining a healthy population size, the National Park Service several years ago began a contraceptive program for the mares. Selected mares are injected with a non-invasive contraceptive called PZP in an effort to maintain the size of the herd in its manageable threshold.

Taylor said Chama Wingapo and her new foal have been seen frequently in the last few days in the highly developed north-end of Assateague and urged curiosity seekers and well-wishers to give the young family plenty of space.

“It’s important to remember birthing is very stressful for the mom, but also for the new foal,” she said. “Everyone is super-protective right now and the stallions are on edge because of the new addition and also the big crowds here in August.”

As recently as just a few years ago, the size of the wild horse population on Assateague had swelled to around 140, or well north of the target range. However, with recent losses to old age, illness or other natural or man-made causes, including last Friday’s unfortunate accident, NPS Resource Management has moved from a reduction phase to an adaptive management phase. As a result, fewer mares were injected with the contraceptive last year, resulting in a spike in births this summer.

“It’s a little unusual, but because we are in our target range right now, only two or three of the younger females were darted for pregnancy,” said Taylor. “There was some expectation that we could have a little baby boom this year.”

After the baby boom this summer, Taylor said the adaptive management program will be reviewed in the fall to determine how many and which mares should be darted.

“We have these four new additions and another expected any time now,” she said. “With the size of the herd in the target range, we’re in an adaptive management phase now, and after all of the births this summer and spring, we’ll re-evaluate where we are with the contraceptive program this fall. It’s not a decision that is made lightly. There is a lot of science that goes into it.”

Meanwhile, the investigation continues into vehicle collision with the 16-year-old stallion Tunkan Hoksila last Friday. Because the stallion suffered a broken leg and was in immense pain, the decision was made to humanely euthanize the animal. Taylor said some have questioned why the horse could not be saved and its broken leg possibly rehabilitated, but she explained the horses on Assateague, while generally friendly and interactive with their human neighbors, are essentially wild animals.

“The thing to remember is this is a wild animal,” she said. “If a deer was hit by a car, it would be humanely euthanized. We’ve heard ‘why not take it to rehab?’ But there is no rehab for wild horses. It was evident when law enforcement arrived he was in severe pain and the humane thing to do was euthanize the poor guy.”

Last Friday’s tragic incident serves as an opportunity to remind residents and visitors to keep a safe distance from the wild horses and enjoy them from afar. The death of Tunkan last Friday brings the number of horses on Assateague that have been killed as a result of vehicle collisions since 1982 to 30. To that end, NPS officials are emphasizing the need for visitors to remain alert at all times while driving through the national seashore.

“The best thing to do is obey the speed limits and remain alert,” said Taylor. “It’s easy to get distracted by so many things on the island. Visitors like to look at the flowers or catch a quick glimpse of the marsh. We all do it to some degree while we’re on vacation, but we have to remind ourselves on what I call situational awareness.”

Motorists are urged to always obey the speed limits on the island and even reduce speeds when situations warrant it, especially when the horses are near the road. The wild horses are often easily spooked by something not obvious to people in a car such as a horsefly bite, the whinny of another horse or a loud noise caused by a vehicle. Taylor used an analogy of kids playing near a street to illustrate the point.

“Of course, we want them to go the speed limit, but sometimes situations call for driving under the speed limit,” she said. “If you were driving on a road where the speed limit was 25 mph, you would naturally slow down if you saw kids playing near the street because you wouldn’t be sure if one of them was going to dart out in traffic chasing a ball or something. You just have to be more alert.”

It’s also important to discourage horses from coming to vehicles. Not only is it illegal, but it encourages the horses to stay near the road and look for handouts.

Taylor said it never ceases to amaze her how many frequent visitors to the island are attached to the horses.

“We were surprised this week when someone sent us flowers to express sympathy over the loss of Tunkan,” she said. “It’s very interesting how connected people are to these beautiful horses.”