That’s what owners Bill and Linda Guckin say is bringing customers to Fin Alley. The new Fenwick Island restaurant, which the Bishopville residents took over last fall, offers a seafood-centric menu and a waterfront location.

She and her husband, originally from Philadelphia, were looking for a business opportunity at the beach when they stumbled upon the former Charlie’s Bayside. They decided to purchase the restaurant in the Village of Fenwick last fall. They kept the restaurant as it was for the shoulder season but closed for the winter to remodel the space.

Bill Guckin says it was the establishment’s waterfront location that caught his eye. A deck provides diners with ample opportunity to enjoy the coastal environment.

The couple spent the winter remodeling the restaurant, upgrading its interior and maximizing the water view for customers. They reopened this year with a new look and a new name. 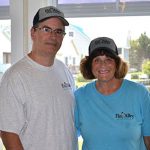 Changes were made to the menu as well, as the Guckins concentrated on adding dishes that put different twists on local favorites. There are the seared jerk scallops, chimichurri churrasco and the alley burger — featuring grilled pineapple sauce, bacon, jalapeño and avocado — among other dishes. Linda Guckin says the Fin Alley rockfish, served with a key lime butter sauce, has been incredibly popular.

He says customers appreciate the staff’s devotion to providing good food and service.

“We really pay attention to detail,” he said. “Staff is in tune to making sure the product is great. People can tell the kitchen really cares.”

In addition to tourists, the restaurant is attracting a number of locals, according to Linda Guckin.

“The one word I’ve been hearing from people is ‘excellent,’” she said. “We’ve got a lot of locals coming back and bringing their families.”

She’s hoping that because the restaurant is in tax-free Delaware, it will begin to draw more diners from nearby Ocean City.