WEST OCEAN CITY- The 17th Annual Stephen Decatur Athletic Boosters golf tournament last week was once again a huge success with a maxed out field of participants matching the record amount of funds raised for the school’s athletic program.

According to tournament director and Head Golf Coach Jim Krall, the tournament raised over $30,000 that will be used to purchase athletic equipment for the various sports programs at SDHS. The tournament was played at Eagle’s Landing last Tuesday and while the event was all about raising funds for the Decatur sports programs and camaraderie and fun, no less important was the competition on the course. 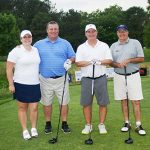 The Boosters would like to thank Eagle’s Landing, all of the sponsors, volunteers and participants for their commitment and dedication to Decatur’s high school athletics.