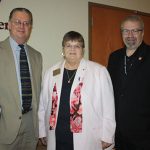 BEACON at Salisbury University and MAC Inc., the Area Agency on Aging, recently sponsored the 2016 GrayShore Summit, a discussion of the challenges and opportunities facing the 50-plus population on the Eastern Shore in the coming years. Pictured, from left, are keynote speaker Howard Bedlin, vice president for public policy and advocacy, National Council on Aging; Margaret A. “Peggy” Bradford, MAC executive director; and Memo Diriker, founder of GrayShore and director of BEACON. 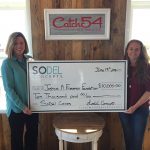 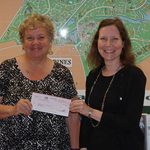 Marie Gilmore, president of the Worcester County Veterans Memorial Foundation, was presented a check by Ocean Pines Association Department of Marketing and Public Relations representative Julie Malinowski, representing the proceeds of a partnership between the OPA and BJ’s Wholesale. Photo by OPA

OCEAN PINES — BJ’s Wholesale Club, in partnership with the Ocean Pines Association, donated $220 to the Worcester County Veterans Memorial at Ocean Pines as a part of its recent spring membership offer.

BJ’s donated $5 of each membership fee paid as a part of the promotion to the foundation in addition to offering special benefits for new and renewing members.

The Ocean Pines/BJ’s membership promotion is offered twice a year. Area residents who missed the spring BJ’s promotion will have the opportunity to participate in the next promotion, which will occur in October.

Now in its sixth year, the achievement celebrates hospitality
businesses that have earned great traveler reviews on the online
TripAdvisor site over the past year. To qualify, a business must maintain
an overall TripAdvisor bubble rating of at least four out of five, have a
minimum number of reviews and must have been listed on TripAdvisor for at least 12 months.

“We are proud to be recognized by TripAdvisor with a Certificate of
Excellence Award,” said Jill Douglas, general manager of Hampton Inn &
Suites Ocean City. “This honor is a testament to our dedication to
exceptional customer service. We appreciate our guests giving us excellent ratings on this site and helping us to achieve this recognition.”
Located at 4301 Coastal Highway in Ocean City, Hampton Inn & Suites Ocean City offers amenities including On the House breakfast each morning and Hampton’s On the Run™ Breakfast Bags, available Monday through Friday.
Additionally, it provides free Wi-Fi, a 24-hour business center with
complimentary printing and a fitness center.
Each guestroom includes the brand’s signature clean and fresh Hampton
bed®. Inviting suites are also available, offering additional space and a comfortable sleeper sofa. Designed as an extension of the guestroom, properties feature a Perfect Mix Lobby, with a variety of seating and lighting options for both leisure and business travelers.

Hampton by Hilton properties participate in Hilton HHonors®, the only hotel loyalty program that allows members to earn Points & Miles® on the same stay and No Blackout Dates on reward stays. HHonors members always get the lowest price with Best Price Guarantee, along with HHonors
Points, digital check-in and no booking fees only when they book directly through Hilton.

Retail stores and restaurants in the area can now stock up on Evolution’s mainline beers, Primal Pale Ale, Lot #3 IPA, Lot #6 Double IPA, Exile Red Ale, Lucky 7 Porter, Rise Up Coffee Stout and Pine’hop’le IPA as well as many of its seasonal releases and age-able ales through Eastern Shore Distributing.

“For us, Evolution’s quality portfolio is a huge addition for ESD’s growth strategy here on the Eastern Shore,” said Rob Burke, president of Eastern Shore Distributing. “Together, we will continue to build the entire portfolio to lead the craft beer industry. We understand the importance of showcasing and ensuring strong distribution and sampling opportunities for the quality EVO products brewed right here in a most-appreciative home market.”

Evolution founder Tom Knorr said, “The goal for Evolution has always been to create great beers for Maryland and the Mid-Atlantic region. Evolution prides itself on representing Salisbury and the Eastern Shore as one of these independent craft beer producers. Partnering with Eastern Shore Distributing will only help to strengthen our presence in our local market along with our other local Shore distributors.”

SALISBURY — Gillis Gilkerson has been hired to renovate the shopping center at 1135 South Salisbury Blvd. that was formerly home to Horner Honda.

“It is always a pleasure to have the opportunity to help a friend out with a new venture,” said Dwight Miller, president, Gillis Gilkerson. “We look forward to giving the shopping center a fresh new look to attract tenants to the space so the Hafez family business can continue to grow.”

The renovation of the 9,000-square-foot building will split the property into three separate units with new exterior work including a new glass storefront and additional parking.

“Dwight Miller is a friend and I have seen the work that Gillis Gilkerson does which is why we hired them for the job,” said Maher Hafez, A&M Family Group LLC. “With the interactions and relationships we are building with Gillis Gilkerson, we plan to be a client of theirs from now on.”

The building will be divided into three, 3,000-square-foot units available for different retail tenants to move into the space. Owners are still in the process of naming the shopping center. Gillis project manager Tyler Barnes reported demolition has begun and permit proceedings are well underway.

Bill Hand at the Marketplace at Sea Colony office earned top listing honors for May.

Top listing agents by office were Anne Powell of the Anne Powell Group at the Bethany Beach office, Cindy Spieczny of the West Fenwick office, Ann Baker of the Edgewater/Sea Colony Oceanfront office and Marc Grimes of the Bear Trap Dunes/Ocean View office.

Jennifer Hughes at the West Fenwick office earned top selling honors for May.

Top selling agents by office were Colleen Windrow of The Windrow Group of the Marketplace at Sea Colony office, Bob Jennings of the Bethany Beach office, Baker of the Edgewater/Sea Colony Oceanfront office and Marc Grimes at the Bear Trap Dunes/Ocean View office. 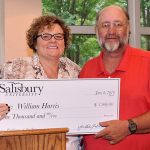 Salisbury University recently presented its Employee of the Year Award to William Harris, who serves as athletic grounds coordinator at the school. He is pictured with SU President Janet Dudely-Eshbach. Submitted Photos

Harris, one of SU’s 12 SU Employees of the Month for the 2015 fiscal year, was nominated in May for his dedication and the positive impact his hard work has made within the Physical Plant. Harris served as the campus’ interim assistant director of horticulture for 22 months.

“There was a staffing shortage [at that time] negatively impacting the appearance of the grounds,” said his nominator, Kevin Mann, Physical Plant director. The entire Horticulture and Grounds Department worked additional hours trying to bring the appearance of the campus back up to standards. Bill had a positive effect on the department by training new and existing staff, and implementing new policies, procedures and standards to develop a systematic way of maintaining and improving the campus grounds.”

In addition, Harris’ regular duties include working with athletic team coaches and staff to maintain the East Campus athletic fields.

As part of an initiative to promote the integration of palliative and hospice care into the U.S. healthcare delivery system, the American Nurses Association (ANA) and HPNA have partnered to form this work group to address this critical issue.