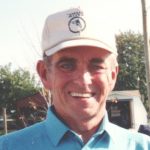 He was born on Sept. 4, 1934 in Baltimore, Maryland to the late John and Catherine Boenzli. Tom was a veteran, a mechanical engineer and a professional piano player. He was an avid golfer and entertained many a crowd with his self-taught, mastered piano playing. He truly enjoyed spending time with family and friends. Most of all, he cherished spending time with his best friend, Dorothy, his wife of 53 years, who preceded him in death in 2011. He was also preceded by his only sister, Ruth Penn, of Baltimore.

The family wishes to thank the many special friends who cared for Tom in the last couple of years. The wonderful managers, staff and patrons of Hooters in West Ocean City were like family and we are forever grateful for their care and friendship of our father. The family will hold a private ceremony.

Condolences, remembrances and photos may be shared at www.never-gone.com

Mrs. Whalan was the daughter of James and Mary (Sheridan) Fay and was born in Astoria, N.Y. on Aug. 4, 1925. She grew up in Yonkers, N.Y. and was married to Francis X. Whalan, who predeceased her.

After the death of her husband, she moved, with her three children, from Yonkers to Highland Lake, in the Catskills.

She was also predeceased by brothers James and Joseph Fay and sister Jean Fay. She is survived by sons William, and wife Barbara Lynn, and James of Monticello, N.Y., and daughter Judith Aim Whalan of Ocean City, sisters Jane Fay and Judy Papp, of Yonkers, N.Y., granddaughter Caitlin E. Whalan, formerly of Ocean City and now of Charlotte, N.C. and seven other grandchildren, 10 great-grandchildren and several nieces, nephews and cousins.

Mrs. Whalan had retired as the Republican Deputy Commissioner of the Board of Elections of Sullivan Coimty, N.Y., after 25 years of service.

During World War II, she enlisted in the U.S. Navy in September of 1944. Because she was too young, she enlisted under her older sister’s name. She was stationed in Washington, D.C., where she worked in Naval Intelligence. She was discharged in July 1945, with a rank of Seaman First Class.

Mrs. Whalan was the past president of the Sullivan County American Legion Women’s Auxiliary and had recently received recognition as Sullivan County’s oldest surviving female veteran.

She was a member of the Town of Highland Seniors and area bowling teams. She was renowned throughout her community for her baking skills.

Mrs. Whalen was honored on Friday, June 17, 2016, with a military ceremony. A Mass of Christian Burial was held on Saturday, June 18, 2016, at St. Anthony’s of Padua Church, of which she had been an active member for 55 years. After the Mass, Mrs. Whalan received a nine-gun salute, followed by a haunting rendition of “Taps.”