TALBOT COUNTY — A literal “side of the road” study aims to attract and help endangered pollinators thrive by creating a more natural environment along stretches of Maryland roadways.

Just last month, a unique partnership between the State Highway Administration (SHA) and the University of Maryland’s Entomology Department was forged in order to launch a three-year roadside vegetation study along 16 acres of roadways in Maryland.

“SHA has more than 5,200 miles [measuring down the center] of roads, creating more than 10,000 miles of roadsides to maintain,” said SHA Administrator Gregory C. Johnson, P.E.  “It makes sense to use these areas to support pollinator habitats.” 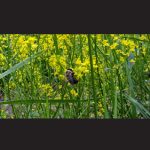 A bumble bee is pictured on some overgrown vegetation along a Maryland roadway recently. Submitted Photos

SHA and the university are using seven roadsides, five in Frederick County (along US 15 and MD 194), one in Carroll County (MD 194 in Taneytown) and one in Talbot County (MD 33) as testing areas to strike a balance between maintaining roadsides while propagating native Maryland meadows, which naturally attract key pollinators. The goal of the study is to compare the effects of two different meadow management strategies: Integrated Vegetation Management and reduced mowing on plant and pollinator communities.

While the Integrated Vegetation Management (IVM) part of the study will be overseen by a Delaware-based company called IVM Partners, the reduced mowing strategy may seem much simpler, but is just as effective from a scientific and cost-saving standpoint as well, according the Lisa Kuder who is one of the leaders of this study and is a university student studying for her PhD.

“In some spots, the SHA would trim the grass to almost like it would be on a golf course,” said Kuder, “but by reducing our inputs we are helping to restore some of the important forage and nesting sites for pollinators like bees and monarch butterflies. The flowers and the other valuable vegetation come back pretty quickly when you don’t mow as often, and it attracts those pollinators that have had a hard time finding a thriving habitat.”

Reduced mowing also saves the state money, about $200 per mile according to SHA spokesman Charlie Gischler, who says this isn’t the first time the state has allowed the grasses along the sides and middle of the state-owned roadways to get a little higher than normal. 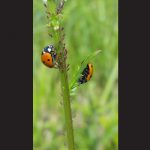 Two ladybugs are pictured on oxeye daisy that has been left to grow to support pollinator habitats.

“We actually had to look at ways to cut back our costs all the way back to 2008 when the recession hit and the price of asphalt was so high,” recalls Charlier Gischler, spokesman for the SHA, “but we quickly realized that it wasn’t just a cost-saving thing, it was also very valuable to the environment as well.”

Yet, Kuder says the study isn’t so much about helping the state’s bottom line as much as it is to help the struggling invertebrate species and plant communities in the state.

A 2016 scientific report released by the United Nations says 40% of the worldwide pollinator species, including bees and butterflies are facing extinction.

“In Maryland, there are over 400 species of bees,” said Kuder, “and once you give nature a chance to come back, it shows just how resilient it is.  We reduce the invasive species of plants, which allows the wildflowers and other important low shrubs to come back, and that increased floral diversity allows pollinators to come back in abundance and diversity. We are already seeing it in Carroll County with the robust growth of milkweed so far.”

Kuder says to some people who may be driving past these locations, the perception of these study sites might be neglect or even an unkempt eyesore. Yet, she says, there is important work being done to preserve even more important species of plants and pollinators. 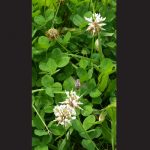 A new partnership along some Maryland roads aims to allow wildflowers to grow instead of being cut back to increase pollination. Submitted Photo

“We have the potential to reshape the public’s perception of how the roadside is being used,” said Kuder, “and I hope that when they see it much more naturalized, they will understand that it’s important to the ecosystem and their perception of what is beautiful might be changed a bit. This is a smart and progressive approach and it makes sense financially and environmentally.”

More and more states are trying IVM plans as well, including Alabama, Texas, Ohio, and Florida, amongst others.  Part of the study in Maryland will determine how well a natural ecosystem can thrive when put up against the conditions of a developed roadway.

Will rock-salt from SHA impact the nectar produced by the flowers? Will the plants survive the harsh conditions of a highway?

These are all questions Kuder and her team aim to answer in the next three years.

“It’s so exciting when you see plant life come back and these pollinators return,” she said. “This could become a common practice and it could make a difference. People are starting to understand the plight of pollinators, but I think people need to realize that there are small things we can do to make a big difference.”

OCEAN CITY — Maryland Governor Larry Hogan on Monday issued a stay-at-home directive for state citizens effective at 8 p.m. and vowed stronger enforcement for those who continue to ignore prescribed social distancing practices.Hogan on Monday announced a new executive order urging all Marylanders to stay at home beginning at 8 p.m. tonight, except for… Read more »