OCEAN CITY — An already hot start to the offshore fishing season in the resort was capped off with the first white marlin of the season off the coast of Ocean City last Friday, followed by the arrival of the first blue marlin a day later on Saturday.

Last week’s first white marlin tied for second earliest ever with the May 27 mark hit in 2012. Since records were first kept in the 1930s, the milestone has historically occurred most often in a window of five to seven days in mid-June. The latest date ever for the first white marlin of the year off the coast of Ocean City occurred on July 20, 1940.

Urban and the crew on the “In the Black” will be awarded a $5,000 check from the town of Ocean City, which recognizes the milestone each year in the White Marlin Capital of the World. Because the “In the Black” is a registered Ocean City Marlin Club member, the crew will also receive a $5,000 match from the club for catching the first white marlin of the season. 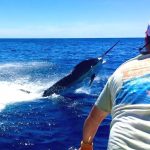 The first white marlin of the season is always celebrated at marinas around the resort area as a symbolic start to the offshore billfish season. The very first recorded catch of a white marlin off the coast of Ocean City occurred in 1936, not long after an epic storm cut the now famous Inlet between Ocean City and Assateague and started to put the resort on the map as a world-class sportfishing destination.

“Ocean City is proud to be the White Marlin Capital of the World,” said Mayor Rick Meehan.  “What a fantastic way to kick off our holiday weekend and the start to our summer than the first white marlin catch of the season. It’s a symbolic start to the fishing season and hopefully a sign of many more for our offshore fisherman this summer.”