OCEAN CITY – A harbor seal returned to his native home this week following months of rehabilitation at the National Aquarium.

Staff from the National Aquarium released the juvenile harbor seal known as Megatron into the ocean on 40th Street this week. After a few minutes of checking out the environment from the confines of his wooden transport crate, the seal scooted into the surf as soon he was released.

“It went really well,” said Nabila Chami, social media manager for the National Aquarium. “Megatron did not waste any time returning back home.”

Megatron, a yearling harbor seal, has spent the past 12 weeks recuperating at the National Aquarium after being picked up in South Bethany Feb. 26. At the time, he was emaciated and suffering from dehydration. He was also covered with skin lesions.

“We’re not certain,” she said. “Often seals will travel awhile when there’s less availability of food and they can get emaciated.” 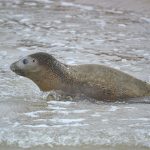 Whatever the cause, Megatron’s condition began improving quickly once he arrived at the National Aquarium. Plenty of capelin, herring and squid, paired with antibiotics and fluids, led to the seal’s full recovery. Though he weighed just 40 pounds when he was rescued, Megatron gained 20 pounds during his stay at the aquarium. He grew 15 centimeters in length during that time.

While there’s no way to know for certain how well Megatron will fare now that he’s returned to the wild, aquarium staff members are optimistic.

“The fact that he gained 20 pounds in just a few weeks means he probably has a good chance,” Chami said.

She said Ocean City was chosen as the release location for the seal because of its open beaches.

“It’s a nice open area,” she said. “It gives the animal easy access to where they need to go.”

According to the National Aquarium, it’s not uncommon to see seals in the mid-Atlantic area during the winter months as they travel south. The semi-aquatic animals typically spend part of their time on land, so seeing one on the beach in January or February is not a cause for alarm. If however, the seal appears to be in distress, as Megatron was, bystanders are asked to call the National Aquarium’s Stranding Hotline at 410-373-0083, or Maryland’s Natural Resources Police at 1-800-628-9944.

Staff from the National Aquarium will return to Worcester County next month, as a sea turtle is set to be released on Assateague Island June 16. For more information visit www.aqua.org.