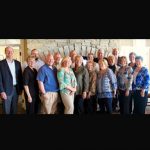 “Our agents are the greatest assets for the company,” said Kevin Wiles, president of the Mid-Atlantic Region. “They contribute to the success and growth of Berkshire Hathaway HomeServices PenFed Realty. We are extremely proud of our award winning sales professionals. They provide dedicated service and expert representation to each and every client.”

The 2015 Leading Edge Society winner from the Ocean City office was the team of Jim and Leslie White.

Recognized in the 2015 President’s Circle were the Ocean Pines office’s Debbie Bennington and Sandy Galloway; West Ocean City’s Ed Balcerzak, who was ninth in Individual GCI; Salisbury/Captain’s Cove, Cindy Welsh; and West Ocean City, Tony Golden of The Resort Group, which was 20th in Team GCI.

Earning 2015 Chairman’s Circle Platinum recognition was the Carol Proctor Team, which ranked ninth in GCI in the company.

“Our unique relationship with the world-renowned Berkshire Hathaway brand combined with skilled performance and innovative techniques of our sales professionals, distinguishes BHHS PenFed Realty from other real estate firms. This commitment to representing clients of wealth makes us a preeminent force in the marketplace,” said Wiles.

BERLIN – Local REALTORS® were very busy in April, according to the latest figures from the Coastal Association of REALTORS® (CAR). 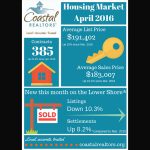 Days on market showed an overall decrease of 17 percent, reflecting a reduction in the amount of time it takes for a home to leave the market and hit the settlement table. Local inventory decreased by 10.3 percent. Listing and sale prices were up by 10 percent and 10.2 percent, respectively.

“We’re so pleased to see such a boost in confidence among local buyers,” Moran said. “And our members are standing by, available to serve anyone interested in a second home or a permanent home on the Lower Eastern Shore of Maryland.”

The trend of increased sales activity despite decreased inventory numbers is reflective of what’s happening in the national housing market, according to Lawrence Yun, chief economist for the National Association of REALTORS®.

“This spring’s surprisingly low mortgage rates are easing some of the affordability pressures potential buyers are experiencing and are taking away some of the sting from home prices that are still rising too fast and above wage growth,” Yun said.

CAR’s monthly local housing statistics are pulled from the association’s Multiple Listing Service, which represents the activity of over 1,000 local REALTORS® in Somerset, Wicomico and Worcester counties.

OCEAN CITY — The entire team at Liquid Assets has announced receipt of the Restaurant Association of Maryland’s Stars of the Industry Award for Wine & Beverage Program of the Year.

“This represents our dedication to our passion. We are constantly trying to improve and challenge ourselves to deliver a higher level of product and service,” said Liquid Assets owner John Trader. “I am so very thankful for our staff’s efforts and this incredible recognition from our peers. But mostly, it is our customers that have supported us for over 30 years of innovation who continue to make it all possible. Cheers to them.”

Earlier this year, restaurants and restauranteurs were nominated in a variety of categories, with Liquid Assets receiving the nod for Best Wine & Beverage Program. The dining public was then given the opportunity to vote for their favorites online. Winners were selected and announced on Sunday, May 1 at the 62nd Annual Stars of the Industry Awards Gala – Moonlight in Morocco. Over 600 guests attended the gala at the Baltimore Marriott Waterfront Hotel, which included some of the top foodservice industry professionals from across Maryland.  Liquid Assets was honored to take home the coveted award for Wine & Beverage Program for 2016.

SALISBURY – Coastal Hospice has been recognized for excellence, as reported by the families of patients in their care. 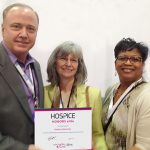 Deyta Analytics, a division of HEALTHCAREfirst, named Coastal Hospice a recipient of the 2016 Hospice Honors Elite Award in April at National Hospice and Palliative Care Organization’s Management Leadership Conference in National Harbor. Hospice Honors recognizes hospices nationwide that provide the highest level of quality as measured from the caregiver’s point of view.

Deyta Analytics surveys families and caregivers of patients after their passing to evaluate the quality of the hospice services they received. They choose the recipients of the Hospice Honors Awards by evaluating the hospice’s performance on a set of 24 quality indicators and comparing the results to all partnering hospices in the nationwide Deyta Analytics database.

“Hospice Honors is a landmark compilation of hospices that provide the best patient and caregiver experiences,” said Bobby Robertson, president and CEO of HEALTHCAREfirst. “I am extremely proud of Coastal Hospice for achieving this highest of honors, and I congratulate them on their success.”

Coastal Hospice President Alane Capen said, “Receiving an award based on the opinions of the families we serve is the highest honor we can achieve. Our mission is to provide the best medical care in the most compassionate way to the patients in our service, and it is rewarding to hear that our families feel we are fulfilling that mission.”

Bohlen Expected To Be Named Town Administrator In Berlin

BERLIN– Berlin officials are expected to announce Mary Bohlen as the new town administrator on Monday. Bohlen, a longtime town employee, has served as acting town administrator since the departure of Jeff Fleetwood in April. The agenda for Monday’s town council meeting includes an announcement regarding administrative vacancies from Mayor Zack Tyndall. “We have an…

BERLIN – Changes will soon be underway at the Glen Riddle Wastewater Treatment Plant in an effort to correct issues that have been costing the county more than $200,000 a year in hauling fees. Earlier this month, county officials agreed to use $1 million in grant funding to replace failing membranes, which separate contaminants from…

OCEAN CITY – While still a little over a month away, the excitement is building for the inaugural Oceans Calling three-day music festival with the announcement of the lineup this week for each day of the event. Last August, Tourism and Business Development Director Tom Perlozzo and C3 Presents founder and promoter Tim Sweetwood pitched…