In the midst of his short tour of the lower Eastern Shore, with Friday stops at Assateague Island, Berlin, Snow Hill and Pocomoke planned, Hogan said he visited OCES because of a letter penned by third grader Savannah Palmisano back in November.

“Savannah invited me to come to visit your school during American Education week, but I wasn’t able to come then,” said Hogan as he posed with Palmisano for a photo op, “but I wanted to come and visit you and your school today.”

Hogan, who traded jabs with Democrats at times during the recently concluded legislative session in Annapolis, took a much friendlier line of questioning from third grade students at OCES.

“Are you like the mini-President of Maryland?’ one student queried.

Hogan also snapped photos with a student named Lucas Magathan who had battled leukemia.  The governor spoke of Lucas’ courage and resolve and said he could relate to the young boy’s battle referencing his own public battle with lymphoma just months after winning the election to be Maryland’s governor. 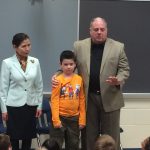 Hogan was also presented with a hand-drawn framed picture, created by OCES students to commemorate his visit to the school.

“What a great picture,” Hogan said. “I’m going to put that in my office in Annapolis to help me remember my trip to your great school.”