OCEAN CITY — Concerned citizens will have an opportunity next month to weigh in on the final design of the dune-style fence proposed for Coastal Highway at a known trouble spot for pedestrian safety.

In January, the Mayor and Council approved the final design for the fence concept along the median of Coastal Highway from Convention Center Drive to Route 90. The median fence project is part of the State Highway Administration’s larger Pedestrian Safety and Connectivity Project for the often dangerous section of Coastal Highway, and while on the surface it appears to accomplish the goal of improving pedestrian safety with a uniquely Ocean City median fence, not everyone was entirely pleased with the final design when it was approved in January.

The design approval in January set in motion a timetable that could have the fence installed by the start of the 2017 summer season, but an important next step in the process is a public meeting conducted by SHA to present the final design to the public and answer any questions or concerns. Mayor Rick Meehan announced on Tuesday that meeting has now been set for March 22 at the Roland E. Powell Convention Center beginning at 6 p.m.

“There have been a lot of comments and some have concerns and some have different ideas,” he said. “We want to make sure everybody has a chance to weigh in.”

Meehan said SHA officials would be on hand at the March meeting to present the project.

“We’re encouraging anyone who wants to voice an opinion or comment on this project to attend this meeting,” he said. “They will have individuals there from State Highway to answer specific questions and have exhibits throughout the room so everybody will know exactly what that is going to look like.” 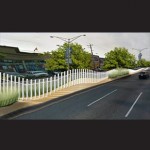 The proposed median design for a section of Coastal Highway is pictured. Rendering by SHA

The project includes enhanced lighting, bus lane adjustments and a physical barrier of sorts in the center of the median to deter pedestrians from crossing mid-block and instead encourage them to use the marked intersections. The project will be fully funded by the state.

The Transportation Committee in December got a first look at the undulating fence that included vertical slats spaced at intervals that mirrored Ocean City’s iconic dune fencing on the beach. Committee members at that time liked the design, but voiced concerns the gaps between the vertical slats would encourage pedestrians to attempt dangerous mid-block crossings.

SHA officials returned in January with a similar design that now includes a horizontal top rail and a bottom rail close to the ground. Also included will be appropriate landscaping around the dune-style median fence that will retain its aesthetic charm while providing a practical solution to the pedestrian safety problem.

SHA officials presented two alternatives for the median fence, including the custom-designed dune-style fence and a more generic prefabricated fence, each of which had its pros and cons. For example, the prefabricated version would have been cheaper and a little more expeditious, while the custom design comes with a higher price and likely a slower pace for completion. In the end, however, the transportation committee and ultimately the Mayor and Council agreed the slight cost differences and timetable variations did not trump the aesthetic and practical value of the custom-designed fence.

The approved design includes vertical slats spaced at intervals which are louvered like window blinds at 45-degrees to allow motorists to see across both sides of the highway. The initial design was similar, but gave the impression of a solid wall from certain angles.

The section from Convention Center Drive to Route 90 was chosen for the initial phase because historically it has seen the most pedestrian-vehicle collisions. Ultimately, the dune-style fence will run down the center of the median for the entire length of the highway.

SHA District Engineer Donnie Drewer explained in January the section from Convention Center Drive to Route 90 would be done first, with future sections likely moving southward because that is typically where the most pedestrian traffic is. He said the overall project could be done in five or six, or even 10 sections, depending on funding.