OCEAN CITY – Winter Storm Jonas claimed a hefty chunk of one of Ocean City’s most well-known landmarks and severely damaged several public parking lots on both the Virginia and the Maryland side of Assateague Island National Seashore. Here’s a brief wrap-up of the damage assessment and the clean-up effort in and around the region:

For the third time in five years, a large portion of the iconic fishing pier near the Inlet was destroyed by a storm.

“The ocean was angry and the waves were high and they took out the end again,” said Ocean City Mayor Rick Meehan on Monday. “I’ve been in contract with the principals, Bayshore Development, which is the franchise holder of the fishing pier, and they’ve begun the study of what needs to be done, what materials need to be ordered and what contractors need to be hired in order to replace that pier, which is their responsibility.”

A hundred foot section of the pier was ripped off during Superstorm Sandy in 2012, and a winter storm in February 2014 left the end of it hanging steeply downward toward the ocean waters below. In both cases, the pier was repaired and reopened by Memorial Day weekend.

Meehan says Memorial Day will once again be the target date for this time around.

Yet, while Mother Nature has been quite unkind to the 489-foot structure in recent years, it has a long history of rebounding after being battered and by the elements, ice, and even fire.

In February 1979, a prolonged and unusually cold winter actually froze the ocean and huge chunks of ice crushed around 140 feet from the seaward end of the historic pier. Following that destruction, the existing pier was rebuilt to its current length.

The pier was first completed in 1907 and was first named Taylor’s Pier after the leader of the development group that constructed it. In December 1925, a huge fire destroyed the pier and three blocks of the downtown area. In 1929, the new Sinepuxent Pier and Improvement Company obtained a franchise from the town to build a new 700-foot ocean fishing pier on the site of the old one destroyed by the 1925 fire. At the base of the pier was constructed the famous Pier Ballroom, which, during the height of its popularity, was one of the most popular destinations in the resort as elegantly dressed couples would dance to big band music by jazz greats Glenn Miller and Benny Goodman.

In 1959, a new pier company took over the franchise and attempted to build amusement concessions across the beach. However, the plan was voted down in a special referendum vote by city residents after months of controversy. The pier then slipped into years of decline after the controversial referendum vote, until it was taken over by Jolly Roger owner Buddy Jenkins in 1975.

Dean Langrell, director of sales and marketing at Bayshore Development Corp, said that the organization realizes that sometimes you have to take the good with the bad when it comes to the weather.

“You go into business in Ocean City knowing there will be some setbacks,” he said. “It’s an iconic part of the town and we want to make sure that we bring it back.”

LOTS OF DUNE DAMAGE IN OC

Ocean City Engineer Terry McGean said it’s too soon to tell if there will be emergency beach replenishment to repair the damaged dune system. 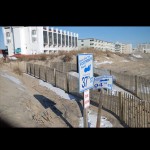 Ocean City’s protective dune took heavy losses from one end of the resort to the other. Pictured above, the dune at 37th Street in front of the Castle in the Sand got an unexpected visit from a street-end sign that traveled nearly 60 blocks during the storm.
Photo by Shawn Soper

“We will be working on the dune.  That is going to happen,” he said. “The second piece to that is will it involved dredging and that’s too early to tell.  It’s in our mind and we are discussing that.”

McGean drove the length of the beach with the Army Corps of Engineers earlier this week to assess the damage and said that about a third of the dune was destroyed in many places and up to as much as half of the dune in other spots.

Meanwhile, Public Works Director Hal Adkins said on Monday much of the initial clean-up and restoration work thus far has been concentrated in the heavily-damaged downtown area around the Inlet and Boardwalk areas although the work will continue through the week and focus on the entire resort. Throughout the week, bulldozers were moving mountains of sand from the Inlet parking lot and rebuilding the beach.

Adkins said the decision to begin tackling the rest of the beach will hinge largely on the determination of the city and its state and federal partners.

“It our intent to wait and see what Terry [McGean], the DNR and the Army Corps decide relative to the beach north of 27th Street before any action is taken by Public Works in those areas,” he said.

Liz Davis, Assateague Island National Seashore’s Assistant Chief of Interpretation and Education, says the Maryland side of Assateague fared far better than the Virginia side during Jonas. 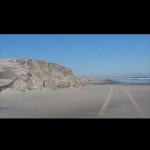 “We are doing okay,” said Davis. “We had the typical overwash in the spots we normally have overwash, but the reason why we had so much sand movement is the winds and the waves were really high.”

Those swirling winds and crashing waves also unveiled many of the hunks of ships and other assorted wreckage that have been on the island for decades.

“It’s amazing to see how this storm cleared all of these shipwrecks and old fence so clearly,” said Davis. “You wouldn’t even believe that a day prior they were hidden beneath four feet of sand.”

According to Assateague officials, the NOAA buoy closest to the island recorded offshore wave heights at as high was 27 feet. Throughout the storm, the recorded wind speeds blew consistently in the 40 miles per hour range with a few readings of 65 mph and even as high as 85 mph recorded.

On the Virginia side, near Chincoteague, Davis said all four parking lots have been destroyed and will aim to be rebuilt and reopened to the public by Memorial Day.

Davis says that while park rangers at Assateague take a much more “hands-off” approach than Ocean City does when it comes to repairing the coastline after a storm, she says it’s getting much more difficult to doubt the looming realties about the changes in nature.

“It’s so in your face,” said Davis. “We are here every day and you can see the amazing changes that have occurred. Sea level rise is evident, the marshes are changing, and in my 24-year career, we have had to move the developed dune area back twice.”

Davis says she’s noticed that because storms are getting stronger, and larger, and are happening more often, she worries about what that means for the future of the island.

“We know that at some point, we are going to have to retreat from this island,” she said. “Probably not in my lifetime, but someday.”