She was a homemaker and a member of Hebron United Methodist Church in Georgetown.

She was preceded in death by her husband, Denver Shoemaker, in 1976 and her second husband, William Quesada, in 1992; a brother, Preston King; and three sisters, Mildred Murray, Catherine King, and Helen Davis.

Born in Baltimore, he was the son of Katherine Adams Berkheimer and the late Robert A Berkheimer.
He graduated from Baltimore Polytechnic Institute and had a mechanical engineering degree from Millersville University. He was an electro mechanical designer for the defense contract industry.
He was an avid Orioles and Raven fan. His and his father’s names are inscribed on the wall outside M & T Bank Stadium in Baltimore for being among the original PSL owners for the Ravens in 1995.
In addition to his mother he is survived by his wife of 32 years, Joyce Armstrong Berkheimer, his sons Bradford and David and daughter, Stacia. He is also survived by 4 grandchildren.
In addition to his father he was predeceased by his sisters, Deborah Crawford and Elizabeth Berkheimer.
His body was donated to the Anatomy Gift Registry of Maryland for medical research.
There will be a memorial mass at St Luke’s Catholic Church on 100th Street in Ocean City on Monday, Jan. 25 at 11:30 a.m. followed by a luncheon at the Swann Keys Club House, just off Route 54.
In lieu of flowers, donations may be made to the Delaware Hospice Center, 100 Patriots Way, Milford, Del. 19963; or to your local hospice or favorite charity in his name.

Mr. Donaway was born on Jan. 19, 1917, in Philadelphia, Pa., and grew up in Millsboro, Del. There he first displayed his talent for hard work when, at age 10, he handled two daily afternoon newspaper delivery routes. When he was 12 years old, he added a job working at King’s Dairy Farm beginning at 5 a.m. each day. An admittedly average student, his outgoing personality resulted in his being elected president of his class for all four years at Millsboro High School. He often said that the most beneficial subject he took in high school was typing, a skill he enthusiastically pursued in his correspondence and memoirs until his death. 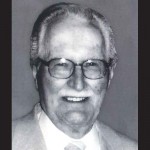 Mr. Donaway served in the Merchant Marine in World War II and moved to Berlin thereafter with his wife, the former Josephine Marie Villani. Together they owned and operated the Elk Horn Cottages at Route 50 and Stephen Decatur Highway, before establishing John Donaway Furniture, Inc. in 1954 on Main Street in Berlin. In the late 1960s, recognizing the potential for business growth to follow the condominium building boom, they expanded the furniture business into Ocean City with the opening of their Montego Bay store.

Mr. Donaway served as a director at Calvin B. Taylor Bank in Berlin until mandatory retirement at age 70. He was an early member of the Berlin Lions Club. He served as president of the Dunes Club of Ocean City and was a member of the first Parish Council of St. Mary’s Star of the Sea Catholic Church in Ocean City.

After his retirement and sale of the furniture business in 1975, Mr. and Mrs. Donaway enjoyed an active social life, spending winters in Florida, where Mr. Donaway served in various positions at Royal Palms Yacht & Country Club in Boca Raton. Their summers were spent at their beach house in Ocean City, where Mr. Donaway enjoyed attending Dunes Club functions, and, particularly, hosting annual reunions of his Millsboro High School class.

After his wife Josephine’s death, Mr. Donaway was married in 2002 to his surviving wife, the former Nancy Molot, who was his loving companion and then, his devoted caretaker, until his death.